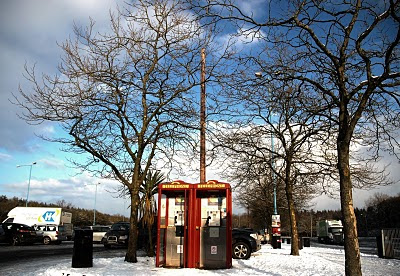 Just before Christmas the doorbell rang and I found a young man at the door with a box. "This was delivered to our house by mistake," he explained. He lives in a house with the same number as mine, but in the next road. This sort of thing does happen. Quite often, in fact. At least, we often get the wrong mail, and I then drop it round to the right house. I rarely get stuff brought to me, though.

Anyway, the box had a cake in it, all the way from Texas. There were no clues on the packaging and labelling to tell me why I'd got the cake, or why it had been sent. I sniffed it suspiciously for explosives or poisons, but I don't really know what explosives or poisons smell like, apart from cyanide, which apparently smells a bit like almonds, according to a Biggles book I once read; which is unfortunate if you've got a fruit cake on your hands, that may or may not have been laced with cyanide. If that's the case, it's probably your safest bet not to eat it.

I put it on the tumble drier, where things go when I can't decide what to do with them.

Yesterday John phoned. He was on the mobile, and I could hear wind blowing in the microphone.

"I'll be there in five minutes."

When he was settled in the kitchen, I offered him a bacon butty, for I know John's likes.

"I'm afraid I must say no to the bacon butty, because I've got a lunch appointment, and I expect to have a bacon butty then."

I then remembered the Mystery Cake. John is a great man for the cakes.

"What about a slice of cake?" I asked. "Lord knows where it came from."

John made a sort of bubbling and fizzing noise. "It came from me," he said. "Didn't it say so?"

"Damn; I shall have to get in touch with everyone else I sent one to."

It was a good cake.

I played with John's camera's funny fish-eye lens, and called Katie through so that she could be in the picture too. 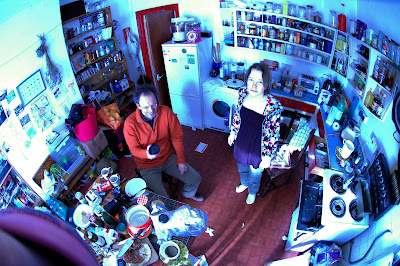