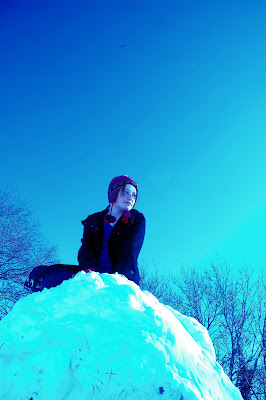 School's out, so we went trogging around the Downs. The sky was clear and the sunlight almost painfully brilliant; birds flying over us were brightly underlit by the reflected light, and looked very different to the way they usually look; I stalked a kestrel for ages to try to photograph it in flight, and ended up with an unusably poor photo and presumably a paranoid kestrel.

I fell over twice, too.

Pavements in Bristol are in a shocking state, icy and mostly untreated and uncleared, even on the busiest thoroughfares; one of the places I fell was on Whiteladies Road.

Over at Green Bristol, Chris Hutt observed the results of this state of affairs, and was invited by Councillor Jon Rogers to go and take some direct action with him. And so they did. Well done, both of you!

My contribution has been to clear the path at the front of the house and a little way beyond, as I have always done, as it seems like an obvious bit of civic duty. Not so obvious to the neighbours, sadly; next door's elderly widow has a house full of young lodgers, who happily let her attempt to scrape her own path clear. So I did that too.

Total number of houses on my road where someone has cleared the path: three. And none of them are the big houses which are used as old peoples' homes, of which we have several on the road. Still, it's better than the state of play citywide; hardly anyone has done anything on their own patch. Shame on you all, I say! 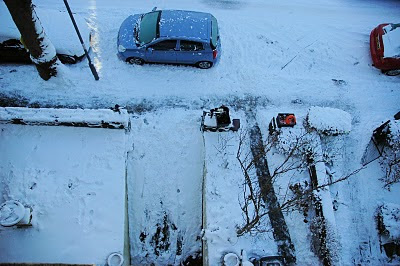