Matthew is a fun guy 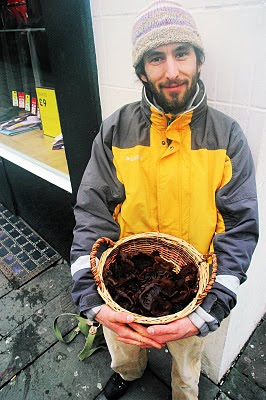 I was waiting in the Bristol Guild cafe with a pot-of-tea-for-one (it was Assam, since you ask) and beguiling the minutes by staring out across the potted plants on the flat roof and sketching the fire escape, just a useful exercise in drawing perspective,which failed miserably, as it happens. It also felt a bit precious, but then that's the Guild for you. Arty. There were two other people wearing berets, and the group of elderly folk across the way threw Anthony Gormley's name into the conversation. Quite loudly. I'm not sure where that particular conversation was meandering, but one of them, a chap with a beard as well as the beret, was one of life's Eddicators. A lot of geology was mentioned; I poised my Lamy Safari fountain pen in readiness to capture the spirit of the thing, but lost the thread soon after he said "the Tibetan plateau is a similar structure." The woman opposite him at the table, to whom these words were addressed, looked duly impressed, though.

And then Charlie came along and we talked. And then we went off in our different directions. Last time I'd met Charlie for coffee, I'd ended up being run over by a car, so this time I was being vigilant. As I ascended Park Street, I saw a man holding a basket, in the sort of way you would hold a basket if you wanted people to see what was in it, but weren't entirely sure that you wanted them to look after all.
So of course I had to look. And then I carried on. And then I stopped and went back.
"You're wondering what they are," he said.
"They're Jews' Ears," I said.
"I'm impressed," he said.
He was touting them around Bristol's restaurants, but it being lunchtime, they were a bit busy so he was biding his time.
We agreed that Jews' Ears aren't the most pretty of fungi, but at least they are available in January. That's macrobiotics for you.
I asked his name, so that I would have a name to go with the photo.
"Matthew"
"I'm Dru"
"Not the famous Dru of Oxford?"
I had to think about this for a few moments.
"I don't think so..."
There's a famous Dru of Oxford? Crikey.


(postscript) I've been criticised for describing the fungus as Jew's Ears. As I don't own the term, I have taken the crit on board, and shall in future make a point of describing the fungus in question as Jelly Ears. Perhaps in time the Latin name will be changed from its present Auricularia Auricula-Judae to something else. I can only say that I was aware of the historical resonances of the name; Judas is supposed to have hanged himself from an elder tree, and it is upon elders that Jelly Ears like to grow. And further, elder is a tree associated with witchcraft. So associating it with Judas, and naming the fungus after him, is both anti-pagan propaganda and anti-Semitism. I consciously used the old name because it is an historical curiosity, in the same way that I look at Marlowe's Jew of Malta and Chaucer's Jewish characters, compared with whom Shakespeare's Shylock seems almost benign; as examples of institutional racism that need to be looked at full-on. But you can hardly be expected to know that, in a casual description like the blog entry above.