fox in the snow 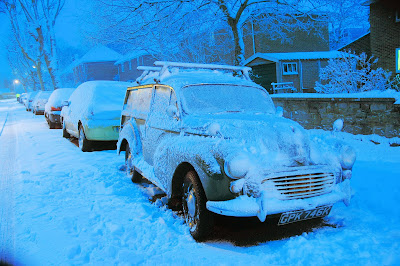 The morning after the night the snow came, I looked out of the front window at about five o' clock and saw a smooth blanket of snow. The only mark on it was the single line of fox prints winding down the street, a Morse code message saying "I'm hungry!"

It changed halfway down the street from dots to dashes; the fox had broken into a run at that point. And suddenly there it was, leaping at something under the car below. I hurried for my camera, but it had gone by the time I returned. Then it reappeared briefly, hurrying round a house against the east wind, defiantly bristling with life in the sub-zero morning.

I've been putting food out for the birds since the cold weather came in; scraps, and crusts soaked in old vegetable oil. I don't have access to the garden, so it has to be hurled down from the kitchen window. Sometimes it goes onto the roof of the garden shed.

The neighbour over the way there has several bird feeders in a tree in the garden, which is ideal for the small birds as they are relatively safe from the swooping of sparrowhawks; her garden is especially popular with goldfinches, and an increasingly large flock of them is for ever flitting down from the neighbouring ash tree to bicker over the feeders.

The food I throw down is sometimes foraged by blackbirds, but usually it is the crows, pigeons and squirrels who get it. I would rather feed creatures with whom I have more sympathy, but I guess bad guys need to feed too, and these particular bad guys can't really help being bad.

Anyway, after the snow came I saw that the fox had been up on the shed roof too. I was quite impressed, I must say.

After a few days I noted that our garden had far more fox prints in it than the neighbours' gardens, and felt unreasonably smug and virtuous. One evening we watched the fox hunting around the gardens and sitting under a tree crunching something that sounded a bit disgusting. But then yesterday morning there was fresh snow and no sign of tracks, and I wondered whether the fox had succumbed to the hostile weather, or whether it had simply done its garden patrol before the snow had fallen.

The answer was there this morning. Last night I'd mixed up the unsuccessful chocolate cake, and the rather long-in-the-tooth oatcake batter, fried up with the oil from a jar of aubergines, and bunged it down into the garden. And there, this morning, was a fresh trail across the garden. Fox lives on!