once in a blue moon 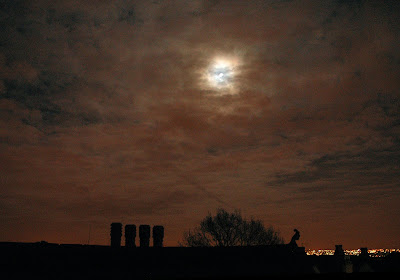 New Year's Eve saw a partial eclipse, and so did Katie and I, because we went up on the roof especially. And by heck it was cold. If you click on the picture you may see the notch cut out of the moon by Earth's shadow, in the lower right hand side. 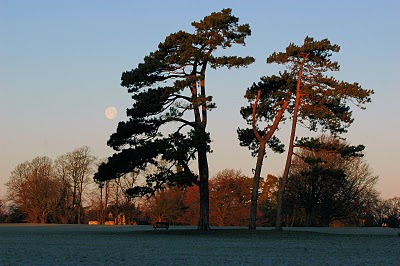 Lord, it's cold. I had to bring my bicycle indoors yesterday, to thaw out the gear changer which is frozen into position.


I've been thinking thoughts about the passing of time, as you do when you mark another year gone, another decade gone. I'm still working on those thoughts, so in the meantime, I'll share this poem that reminds me of my feelings after my father died, a few years ago. It's by Charles Causley. I first encountered it in an anthology of poetry, Staying Alive, that was my constant companion in the wild days of 2002 or thereabouts.

They are waiting for me somewhere beyond Eden Rock:
My father, twenty-five, in the same suit
Of Genuine Irish Tweed, his terrier Jack
Still two years old and trembling at his feet.

My mother, twenty-three, in a sprigged dress
Drawn at the waist, ribbon in her straw hat,
Has spread the stiff white cloth over the grass.
Her hair, the colour of wheat, takes on the light.

She pours tea from a Thermos, the milk straight
From an old H.P. Sauce bottle, a screw
Of paper for a cork; slowly sets out
The same three plates, the tin cups painted blue.

The sky whitens as if lit by three suns.
My mother shades her eyes and looks my way
Over the drifted stream. My father spins
A stone along the water. Leisurely,

They beckon to me from the other bank.
I hear them call, 'See where the stream-path is!
Crossing is not as hard as you might think.'

I had not thought that it would be like this.