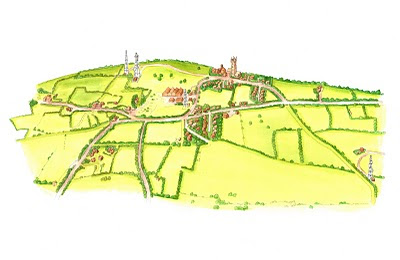 This is a view of Dundry Hill, south of Bristol. It is looking northwards, with the village and the church perched above the steep slope on the north face. The church was built by the city's Merchant Venturers, so that the crews of ships returning to Bristol up the Avon could see it. Apparently.

I'm glad I persisted; this version is much better than the first two attempts. I used Sennelier ink, diluted, on dampened paper, for the fields, and it was smoother than the watercolour washes I'd used previously, and I didn't need to mask out the details. So that was a lesson learned.


Thinking maps, John Lee, my rather professorial friend, tells me that his Map of Elizabethan and Jacobean Bristol (to which I have added a few modest contributions, though I was rather pleased with the Bristol eskimos story) has now had 5,500 views. He has added further sites and information. Why not have a look?


View Elizabethan and Jacobean Bristol in a larger map