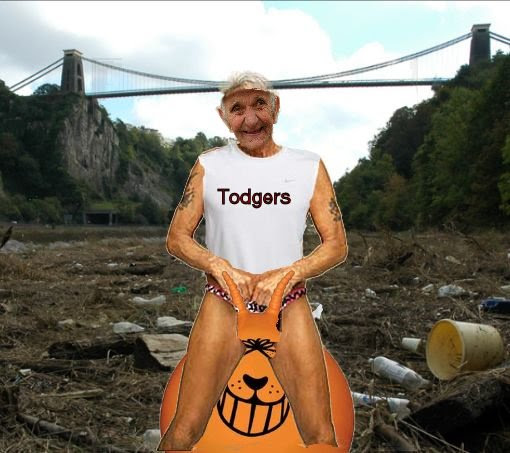 Great news for Bristol's prestigious Harbourside! The American restaurant chain, Todgers, has been give the go-ahead to open a branch here, in premises formerly occupied by Marks and Spencer. This should help to raise the tone in an area already popular with the sort of people who like to drink themselves stupid and shout a lot.

Todgers will be selling chicken wings and beer until midnight every night, but what makes Todgers extra special is its waiters, all specially chosen for having big penises, which will be prominently displayed in the tight Speedos that constitute most of their uniform. This will help to create a relaxed and stylish, family-friendly environment.

There have been protests from some killjoys, who claim that this sort of thing objectifies men. At a meeting of the City Council on Tuesday, a member of the campaigning group MMANLY (Many Men Are Not Lecherous, Yeah?) invited the councillors to imagine how they would feel if a restaurant called, say, Hooters were opened in Bristol, where potential waitresses might not be given a job if their breasts were not big enough.

He was interrupted by the Lord Mayor of Bristol, Colin Smith, who said, "Excuse me Mr Chesney, I think you are stepping over the bounds of decency."

Quite right too. It is one thing for a healthy, red-blooded man to ogle the willy on a fit young feller. And, as has been pointed out, Todgers is not asking its staff to wear anything more skimpy than can be seen any night of the week, if you happen to be on certain parts of the Clifton Downs. You know, like if you just, like, happened to be passing. In a fire engine with the searchlight on, or something.

But suggesting an establishment where women are objectified? That's just wrong, and we would not stand for it in Bristol. Well done, Mayor!

(this post re-posted from September, as previous one had gone off the radar)