not Fit for purpose 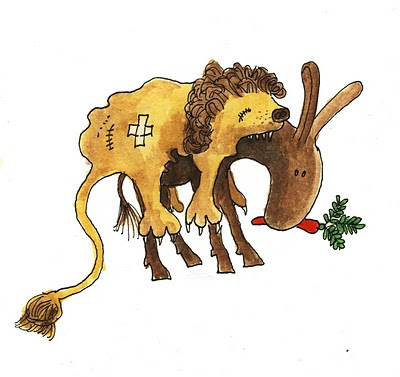 That's not a lion, that's a tired old donkey

Following on from last week's publication of the shortlist for the Stonewall Awards, we find that the nomination for Journalist of the Year has been withdrawn from Bill Leckie, a columnist on the Scottish Sun whose work has been cited by Stonewall Scotland as an example of bad journalism.

Bill seems a little peeved at this, claiming that he had been dropped from the list without having been told. "I'd have thought they might have had a bit more backbone than that, but hey ho," he said. A sentiment with which I'd have to agree.

Irrespective of any possible merit or otherwise in Bill Leckie's writing, there is a conversation which might be worth having here, between Bill Leckie and Ben Summerskill of Stonewall. Like, whether either of them take on board Stonewall Scotland's analysis of Bill's work, and if so, how much time they think has to pass before a writer can be dissociated from what he has written, if he has not modified his tone in the meantime.

But I doubt if it will happen.

More fun and games with Stonewall today; they are promoting a video for use in schools. It's called Fit. It's about challenging homophobia, as far as I can make out. It also seems to think that it's OK to call transgender people 'trannies'. Well, yes, Stonewall. Just like 'homos' is an acceptable term for gay people. Innit.


And these people have apparently been advising government ministers on trans issues relating to marriage and Gender Recognition certificates. Despite there being perfectly good organisations and people within the trans community. We don't need to be spoken for by someone without a mandate, and who has explicitly stated that they do not represent trans people.

Then again, they don't appear to want to represent lesbians or bisexuals either. In their press release for the Stonewall Awards, they describe it as a celebration of 'champions of gay equality'. On having this erasure of the L and B part of their corporate identity pointed out to them over on Facebook, they responded that "We sometimes shorten it to 'gay equality' to be concise and acronym-free for the media...". Fair play. In the same way that use of 'he' as a pronoun should be taken to mean 'he or she', of course.

And then there was the rebuke put to Stonewall by Stephen Gilbert at the Lib Dem conference- "It should not be for me as an MP to lobby Stonewall to support gay equality, it should be for Stonewall to lobby me".

Something seems to be a bit wonky over at Stonewall. I'm sure they used to be a useful organisation. I'm not so sure they are now.

Still, they do wear ties. That counts for something.