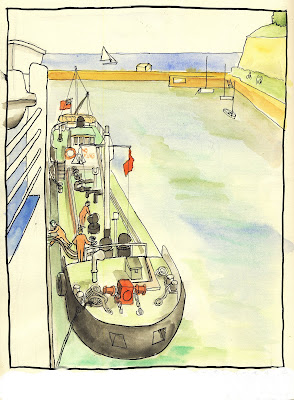 Commenting on my post yesterday, Lucy suggested that it was a bit retrogressive going along on the Bristol Pride march. I kind of get what she means, but then perhaps there are all sorts of Prides, and each one is what you make of it. Or it is the sum of what the people who have organised it and participated in it, make of it.

The Bristol Evening Post mentioned the event on their website, and attracted some interesting comments, some of which sadly got deleted (also sadly, my own comment didn't actually make it onto the website, but hey) 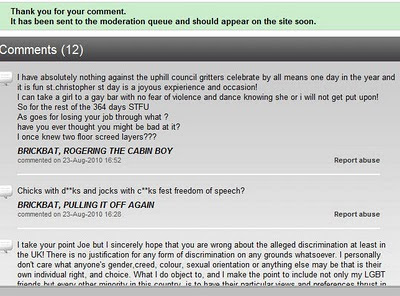 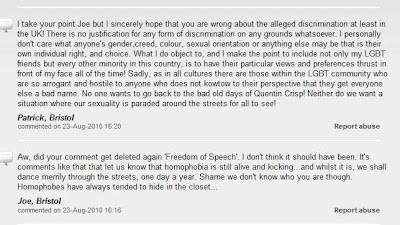 
not only my LGBT friends but every other minority in this country ....have their particular views and preferences thrust in front of my face all of the time!

I think it was worth joining in Pride just for that...

It's a tricky business, balancing between acknowledging and dealing with my trans history, and just getting on with life. And I suppose there are no right answers, and possibly no particularly wrong ones either. But, reading the EP comments section, it's evident that there's still no shortage of ignorance. The sort of ignorance that can lead to bad things happening to people.

As I was looking through my old stuff yesterday, I noticed that this is what was happening in my life, on board the Pride of Bilbao seven years ago. It's good to look at it and think how far I've come since then. Seven years. Crikey!


So a notice goes up in the Engine Control Room about the Shipboard Management Meeting, where crew grievances will be addressed; we are invited to write our whinges on the adjacent paper. The usual gripes come up; Why is the food so crap? (because it is...); When are we going to get financial parity with the Deck Department? (when hell freezes over...). I add my own; When are we going to change filthy pornographic calendar in Control Room for pictures of fluffy bunnies and daffodils? ...the next day, I find that it has been laboriously scribbled over to make it entirely illegible, and FUCK OFF scrawled under it.

But, to get things in context first, I check the big book of Company Regulations. There's stuff about drugs and drink, standards of appearance and something called 'horseplay'. But there is no company policy on pornography. I take a photocopy of this month's FLUFF 'N' STUFF calendar girl hanging in the Control Room, and show it to some of the girls who work up in the passenger department. They blanch, and express their shock that it is allowed. Fortified in my resolve, I pen my amended question; What level of explicitness should be deemed appropriate for the pornography displayed in work areas? -for example:

.this is what I understand is called a When Did You Stop Beating Your Wife
question, which cannot be answered without the answerer damning themself...

But I think I'd better have a word with the Chief to sound out the water. He points out that making an issue of the calendar might alienate me. He really can't see anything wrong with porny calendars. He puts it down to my hormonal changes; "In all those years at sea, you must have read pornography, surely, Dru?"

The Chief wants to keep the matter 'in house'. And so the matter rests, with a vague understanding that next year's calendar will be a little less, er, risque...

And next morning, to make up for it, Chief enters the Control Room with a brisk "Morning, ladies and gentlemen."

"I don't see any ladies," says Dave S, the electrician, a grumpy old sod from Hartlepool, a town whose inhabitants gained notoriety for hanging a monkey, thinking it was a french spy.

"Drusilla," says the Chief, gesturing royally in my direction.

With insight like this, one might reasonably fear for the safety of any
monkeys unfortunate enough to find themselves in Hartlepool.

I come up with the great answers to that one, later, of course. Too late. O
well.

A fortnight ago finds me back in the engine room after a few weeks' absence. I find that the calendar in question has been graffitied; someone has written "DRU" in a very immature hand, and an arrow pointing to the vagina. I am outraged. I discuss it with the engineer of the watch. He gives his opinion that I should let it lie; "You've got to be broad minded at sea," he says.

I mull it over, and by the next morning think maybe he's right. Don't want to be confrontational... but then I go into the Control Room and see everyone sitting drinking their tea, and this THING hanging on the wall as though it was perfectly normal. I take it down, call for everyone's attention, point out the graffiti, and say that it is entirely unacceptable. I then rip up the calendar and bin it.

Instantly I get two men shouting at me; one tells me I'm "....going to get done in; not if, but when...." I leave the engine room, and award myself the morning off....

(a friend helpfully suggested I have a word with the Union rep. "It was the Union rep who threatened me," I replied.)

The Engine Room Trolls have a mutter, and decide to send me to Coventry. At last count, there are seven of them not speaking to me; they sort of glower sulkily as I pass, like little boys who've been caught out doing something they shouldn't.