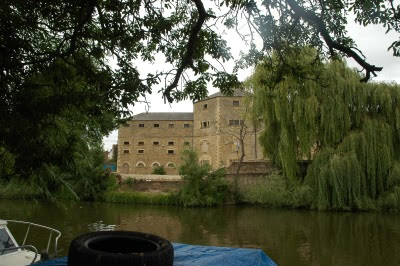 I'd arrived in Abingdon, and was looking for somewhere to launch a canoe. So I parked up next to the river and looked around.

Actually, I'd been driving for a couple of hours and I really needed to pee. So that was top of the list of Things To Do.

Next to the car park (60p for the first hour) there were two shiny metallic toilets, looking for all the world like little spaceships. I didn't take a photo of them, so here they are on Street View

...actually, what they really reminded me of was the rather scary machine things on Doctor Who that pull people inside them and turn them into Cybermen. And, to add insult to injury, you have to pay 20p to use them.

Rather than risk being turned into a Cyberman, I sneaked into the bushes and peed there. It was a quiet spot, and someone had had a discreet fire there, in an arch under the bridge hidden behind a screen of willow.

I then turned my attention to the river bank.

On my side of the river was something of a quayside, about five feet high and therefore no good for canoes. There were lots of cabin cruisers and narrowboats moored up there. Someone was mustering his supplies of food and water on the bank next to his boat. We exchanged good mornings.

Across the river, the rooftops of Abingdon were surmounted by the tower of the Town Hall, looking for all the world like Winstanley's Eddystone Lighthouse. But since it had been built prudently in the middle of an Oxfordshire town rather than on a rock in the English Channel, it had avoided the fate of both Winstanley and his lighthouse. 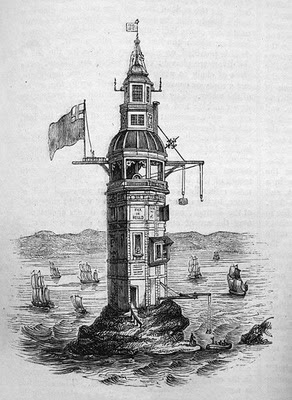 I didn't take a photo of that, either. So here's one I prepared earlier.

On the riverbank opposite was a building I'd sort-of-noticed before, but not registered. I looked again, and noticed the central tower with the wings radiating out from it; and the tiny windows with bars on it. It was a prison. In fact, it reminded me of the description of the French prison in Victor Serge's book, Men In Prison; not so much a 'machine for living in' as a machine for keeping people alive, but confined, in as efficient a way as possible.

No doubt that sort of thing is necessary, but it still seems an odd and rather anti-life thing to do. It's hard to imagine giraffes, say, doing it to each other.

Anyway, it's no longer a prison; it was a leisure centre for a while, apparently, but now they're struggling to think of what to do with it this time round.

I asked a chap in the boatyard by the bridge where I could launch a canoe. He told me that the marina at the other end of town had a public slipway. As it happened, I found a nice little place next to the parish church, from where we managed to launch quite easily. The parish church was interesting because it was at least as wide as it is long. But I didn't take a picture of it either.

I'll describe the canoeing trip another time, though.

The next day, I was driving home. I took the A420 across country to Swindon. It is the sort of road where you get people in cars who want to go very fast, and then they find themselves behind me in my Traveller, going at 50 or 60 miles an hour, and then they do stupid dangerous things to get past. I had three stupid dangerous drivers getting past me, that morning. And ten miles later, two were still in sight ahead of me and one had turned off the road a few moments after overtaking dangerously...

It was rather a jolt to realise how fundamentally our approaches to life differed. It also reminded me of the freely-given opinions of someone to whom I became related by a family marriage, who used to volubly accuse me doing things just to be different.