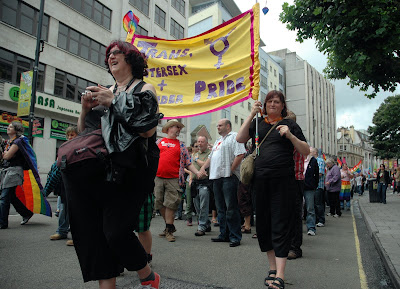 It's been quite a Pride week in Bristol, and Saturday was the big day, with a march and a party in the park. I tagged along, and bumped into lots of friends, some of whom I'd only met online before.

There was a terrific mix of people there, some extremely flamboyant and eccentric, some looking dangerously like Normal People. All getting along very well together, and celebrating it being OK to be whatever they are. Which is sort of what Pride is about, isn't it?

This is what I wrote after we went to Bristol's Mardi Gras event in 2005. Big difference.

Well, Katie and I went down to the Bristol Mardi Gras yesterday. I'd explained what gays, lesbians and bisexuals are. As we cycled down the hill, she asked if a group of girls we'd passed were lesbians. "Impossible to say," I said.

The Canon's Marsh Amphitheatre was ringed with steel fencing for the occasion; we went in and wandered round feeling lost. Some people on stage were playing stuff from Rocky Horror. There were some drag queens. I looked at some gumph on the FFLAG (Friends and Families of Lesbians and Gays) stall and was blanked by the blokes running it. We left; Katie was rather upset. "I don't think they like women very much," she said. I was feeling alienated. 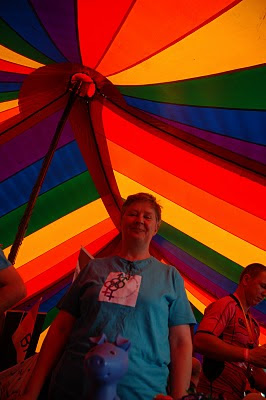 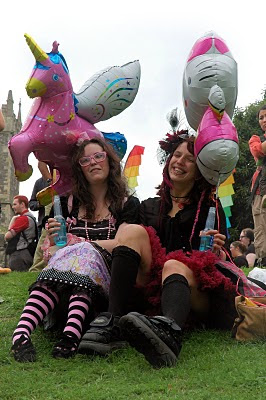