canoeing down the Thames 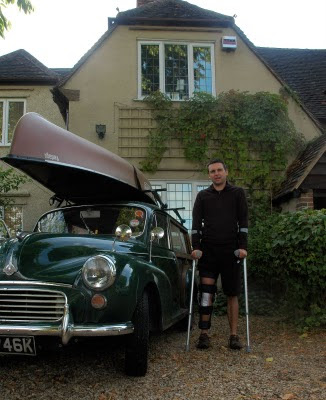 We had great plans for an adventure down the Thames, Richard, young Maud and me. And then he went and pranged his leg, during a cricket game. The shock waves from the snapping of the tendon set things a-bobbing furiously in the Beard household, and the ripples even reached Schloss Marland. No canoeing for Richard. However, Maud was still keen for the adventure, and so was I.

So we set off to find the marina in Abingdon that had been recommended to me as a launch point. But then I got horribly lost. This was fortunate, because it meant that we found this slipway on St Helen's Wharf, which is just the right size for launching a canoe. 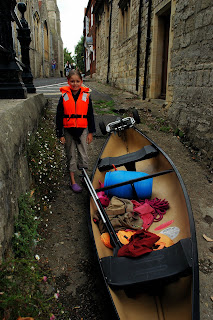 Here we are, putting on our lifejackets and stowing the gear. Camera in the watertight barrel, check. Chocolate, check. Paddles, check. Stove and tea-making stuff, left in the car. Damn. It was only later that it would come to feel that it would have been a good idea to have taken that.

Off we went, then. A kindly wind blew us on our way, so that we were able to overtake the occasional pedestrian, and exchange nods and smiles. Groups of teenagers sat under willow trees, practicing being disaffected. They were getting good at it. They neither nodded nor smiled.

We saw a pair of grebes, the first of many pairs. For some reason, there was a single parent and a single young grebe in each duo. And in every instance, the young one was volubly saying "Feed me!" At least, I guess that is what it was saying. Grebe is not one of my languages.

Beyond Abingdon, the river banks became surprisingly wild and impenetrable with tangled trees, chiefly willow and alder, and brambles, nettles, Himalayan balsam, monkeyflowers, and these vivid purple spears whose name I do not know. 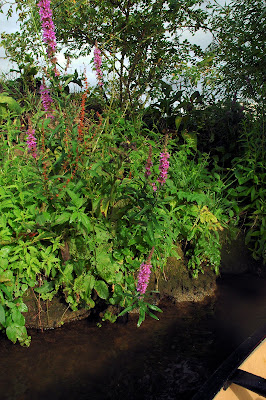 (edit: I have been informed that this flower is purple loosestrife. Thank you, Julian and Larry!)

We passed fishermen, who resolutely blanked us as we passed, because fishermen are a miserable lot. A small boy, who'd been told to go fishing with his dad and uncle by his mum who wanted to get them all out of the house, shouted excitedly to us as we passed, asking if we were enjoying ourselves and telling us about the fish he hadn't caught. His father and uncle sulked over their beer cans at him letting the side down. We gave them a smile just to rub it in.

There was a fork in the river above Sutton Courtenay; to the left is the cut that leads to the lock, and to the right is the village, and four weirs. The village and the pools below the weirs looked much more interesting than the cut to the lock, so we went that way, paddling determinedly past the sign that said DANGER. I'd recce'd the area on Google Map, and read up on the weirs to see how dangerous they were. Weir No 4 sounded plain scary; it has drowned loads of people apparently, because once you go down it you are trapped by something or other underwater and then that's that.

So we didn't want to go that way.

In fact, I didn't really want to shoot any of the weirs today. 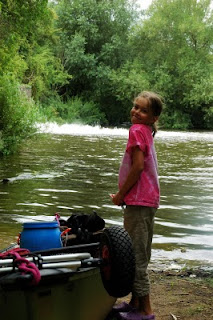 So we tied up next to the friendliest of them, N0 2, and went looking for a path down to the pools below the weirs. What we found was a passing cyclist, who directed us to a short track to a sandy beach. He helped me lift the canoe out of the water, and offered to help carry it down there. Which was jolly nice of him, but I said that we'd be OK with the wheels. And so we were.

Here we are, about to launch into Sutton Pools, and catching up on a bit of chocolate therapy.

And in no time, we were back in the wilds. So wild that I began to wonder if we'd taken the wrong turn and were heading along a hitherto unknown waterway, as the banks were so wild and we seemed to be the only people in this particular part of the world. But then along came a narrowboat and a cabin cruiser, and we were back in Oxfordshire instead of Heart Of Darkness Congo country.

And then the sky darkened, and it poured down, and we went alongside a wharf by Wittenham weir so that we could get our waterproofs on. But a man in a big cabin cruiser alongside us popped out wi 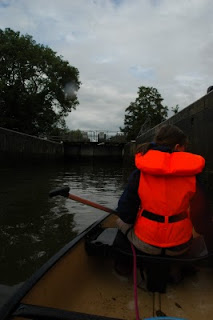 th umbrellas for us, and invited us on board for tea. We gratefully accepted the brollies and reluctantly declined the tea. Well, I did; Maud didn't get any say in the matter. It was getting late, and I had no idea how much longer it would take to get home.

The rain eased, and we paddled on. And soon arrived at Day's Lock. I intended to carry the canoe around the lock, because I find the idea of going through locks in a canoe a bit scary, and so we went alongside and tied up, were about to hop out when the lock-keeper called and gestured for us to enter.

And it wasn't really scary at all.

And then the sun came out, and the wind dropped to nothing, and everything was perfect on the river, and there round the bend was the bridge and church of Clifton Hampden, and journey's end. 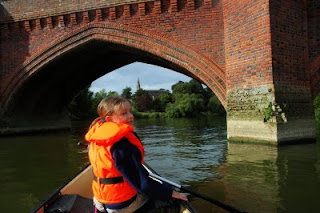