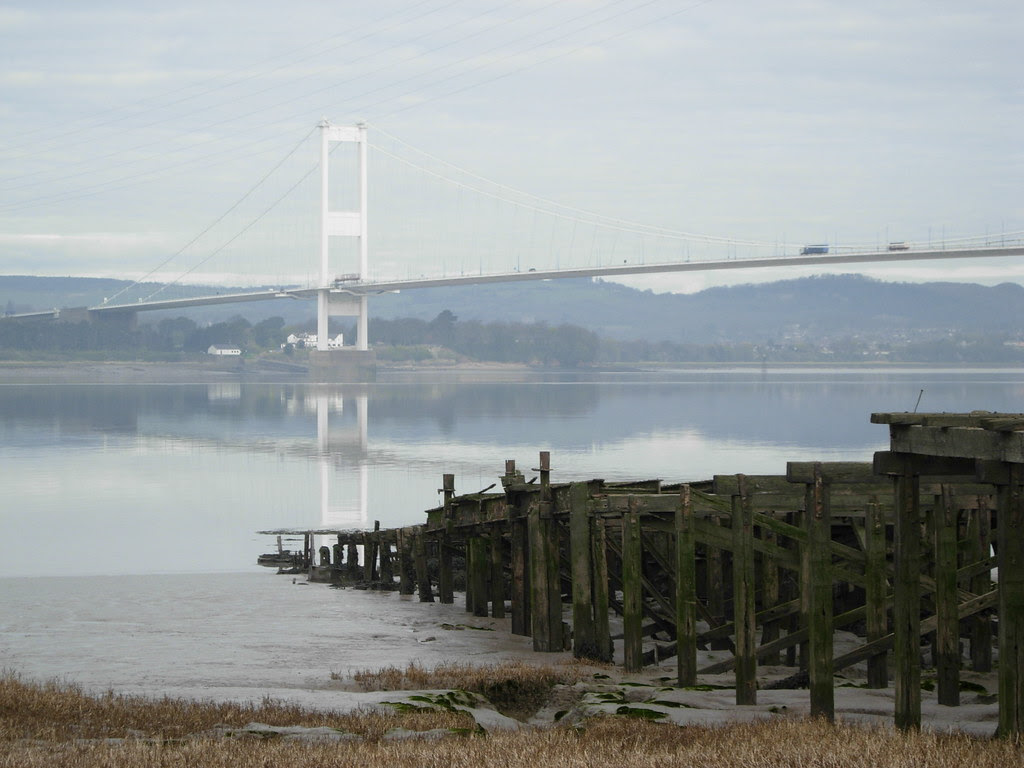 From the archives... this is an account of a canoeing trip from Severn Beach to Chepstow that Richard and I did, ten years ago. Serialised, for ease of digestion.
Part 1 / Part 2 / Part 3 / Part 4

"It feels rather cosy, really, between the two bridges... like being in a pool," Richard mused.
I rested my paddle and looked over to the south-west at the new Second Severn Crossing, close by- the road scarcely ascending in its transit from shore to shore, and, at the big span in the middle where the ships go through, the suspending cables radiating out from the towers like kipper bones. A pragmatic bridge, tiptoeing on concrete stilts through the shallow bit where the reef of the English Stones is exposed at low tide; then hopping across the deep channel of the Shoots, and tippy-toe ashore on Caldicot Moor. Then I looked to the north-east at the old , the elegant curve of the roadway in mild opposition to the swooping catenary of the main cables, an arc swung from shore to shore, a proper bridge; and the stream of vehicles, high up there, heading for , silent at this distance. Impressive, certainly, but- cosy? Tosh, I thought.
But then, Richard is a rugby player. Perhaps the twin towers of the two bridges bounding our portion of the estuary suggested goal posts, and a tidy game of two halves, between equals, playing to the rules. A consoling notion. For my part, I viewed the lower reaches of the Severn with the utmost mistrust, for all that, on this spring morning, the water lay smooth and apparently placid, with only the occasional dappling where the flood tide eddied around unseen banks; and the rich silt suspended in the water was a cheerful shade of orangey-brown in the late morning sun. You never know quite where you are with water, particularly water that doesn't know quite where it is, here at the meeting place of river and sea.
Away and ahead of us to the north lay the Caldicot Level, the flood plain of the on the Welsh side, stretching from the mouth of the Wye to the Usk. We had been looking at it for some time now, as we paddled in its general direction, without any obvious sign of progress. But now, it was possible to make out individual cows, grazing placidly in the April sunshine; and, beyond them, I saw the tower of a church... a squint at the map prudently stuffed into a plastic bag... the church at Mathern, standing steadfast and unmoving, as church towers should, while the wooded hills of Wales on the horizon beyond slid smoothly from left to right, towards the border.
"We're getting carried along at a fair old lick," I said, pointing out this phenomenon.
"Yes, and we're going the wrong way," Richard replied, with a disgruntled tone creeping into his voice.
"No, it's the right way, all right," I said, again resting my paddle either in front of me, or, if you will, athwart the gunwales. Any excuse for a rest and a spot of didactics, and Richard is, or pretends to be, obligingly naive in several areas of practical mechanics. I held up my index fingers in line ahead. "Look, this finger's the church tower, and this finger's the hill. Now, my head's the canoe, and if I move it to the right, the hill appears to move right as well.... see?"
Because, for Richard to see, it was necessary for him to swivel around in the limited space afforded him up there at the sharp end of our rickety boat, we wobbled alarmingly and shipped some water. Furthermore, he remained resolutely unconvinced. He resumed his position, lit a cigarette, and contemplated the shoreline. I idly dabbed the water with my paddle. After all, the tide was doing the work for us. Or not, depending on how you looked at it.
The day before had seen us at the observation point, overlooking the Severn Bridge, at Aust Service Station, an hour before high tide. We were observing the state of the water, with a view to navigating it. Richard had arrived in Bristol with his walking gear a few days earlier, declaring his intention to 'do' the Offa's Dyke Long Distance Footpath, having been thwarted in an attempt a few years back by foul weather. This plan chimed in with my vague notions of a walk across Wales, in the direction of St David's, and mixed itself up with the urgings of the time of year and a smattering of Chaucer-
Whan Zephirus eek with his sweet breeth
Inspired hath in every holt and heeth
The tendre croppes,...
And smale foweles maken melodye,...
Thanne longen folk to goon on pilgrimages,
And palmeres for to seken straunge strondes,
To ferne halwes, kowthe in sondry londes* ...
Both our walks would begin at Chepstow, Gateway To Wales; but I was concerned that we should arrive there in a manner rather more intrepid than simply hopping onto a bus. Travel has become too easy these days (unless, that is, you are obliged to use the M25 or the rail network), and it is possible to arrive somewhere distant with your brain still at home. Entering a town from the sea, however, emphasises its foreignness, making it, indeed, a 'straunge stronde.' It was, I thought, time to dig out the canoe from the back garden where it had long lain disregarded, and evict the snails which had occupied it in droves, and survey the damage wrought by three years of neglect.

* Chiefly self-explanatory, but:
a 'palmer' is a pilgrim with a frond of palm worn as a symbol of their having
visited the Holy Land
'straunge strond' is 'foreign shore'
'ferne halwes' are 'distant shrines'
'kowthe' is 'known'