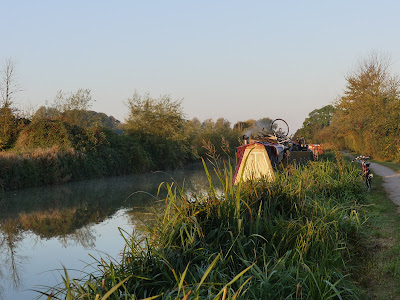 As I was a-walking one fine autumn morning,

I heard the reeds crackle with the starlings at play,
And I goofed with the camera and missed their departure,
as they rose in one body and all flew away.

Then a fox in the field was a-leaping for mouses,
and frisking its tail in the meadowsweet's dew
And what with the faffing and pressing wrong buttons,
I succeeded in failing to film the fox too.

So here's my boat, and the silent reed beds, and a culvert fox-red with rust because there's iron in the hill. 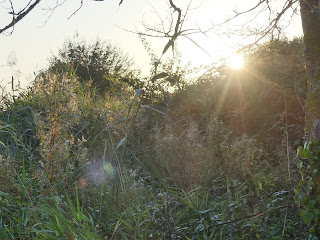 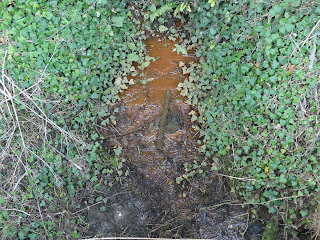 There was an ironworks here once; and John Aubrey investigated the water and reckoned it was as mineral-rich as Bath and proposed a spa; there is a wellhouse somewhere in the village, which I must search out one day, but Seend never quite took off as a resort.

Shame about the missed shots; the starlings were very nice to hear and watch. There's a small but respectable crowd here, enough for a bit of a murmuration. They fly in and gather on the power lines on the hill, then do a quick airshow, and dive abruptly into the reeds. And in the morning, I was stood on the other bank listening to the starlingerie fizzing and crackling away, and tried and failed to film the sudden burst when they all rose up. Maybe I should have just enjoyed the moment.

I was singing Game of Cards as I was walking; you'll find it here, sung by June Tabor and Maddy Prior. The verse I wrote here fits the tune...
Posted by Dru Marland at 05:58