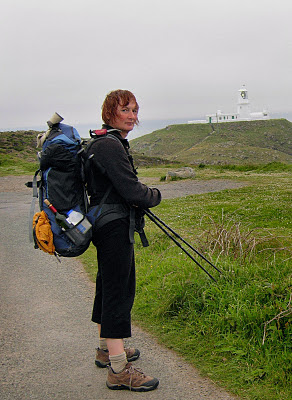 this is what a transsexual* looks like
I found a folder of photos from the Welsh walk, the other day, that I thought I'd accidentally deleted. It was nice to find them again.
Coincidentally, that very same walk across Wales, that forms the framework for Becoming Drusilla, got criticised recently in the first unfavourable review that the book's so far received (on Amazon, anyway).

'Just give me the facts', 'get on with it' were what I was thinking more and more as I read on. Finally I gave up. The camping interludes killed it for me. Camping doesn't interest me, the trans-gender story did. Ultimately the latter is bogged down by the former and I didn't make it even halfway....

It got me thinking. A big part of why we did the book was to break away from the notion that the'transgender story' is something pink and fluffy, or possibly angst-ridden, and involving femininity coaching and trips to shopping malls and nightclubs. Camp, as it were, doesn't interest me... The Standard Tranny Narrative. You know. The same sort of reason I started this blog in the first place; to provide me with my own voice, and to talk about stuff that I do and that interests me. And if I am indeed transsexual, or transgender, then my drawing, cycling, cooking, parenting, poetrying, fixing the car or whatever, even the occasional forays into trans activism, generally living, are all part of my own particular 'transgender story'.

I invited Zeddy to write more, about what he had hoped for or expected from the book. It would, I thought, be a potentially interesting dialogue. After all, if someone doesn't like the book to the point that they don't even finish it, then the book has failed, in that instance at least. And it is a book with a message. Which didn't get across.

Now then. Richard will be in Bristol tomorrow, Thursday 20th October, for a couple of events under the aegis of 'Unputdownable', the new Bristol Festival of Literature. You will find him at Foyles, talking about Lazarus Is Dead, and later at St Mark's Easton, discussing and critiquing.

*yes, transsexual is an adjective. I was being ironic. Ironic? Yes, I think that's the word.