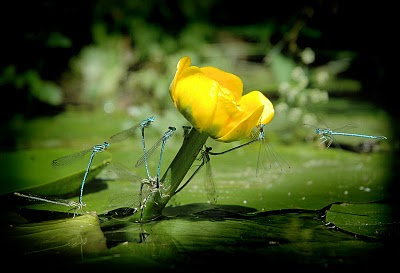 Out and about for Midsummer, we rumbled through Bath and down to Farleigh Hungerford, to go swimming in the river. There's been a swimming club there for some time, and there are some nicely rudimentary changing cubicles into which we entered, brushing through the overhanging branches, to find an owl pellet on the bench inside. We were the only ones using the changing facility; lots of people were dressed as for swimming, but were industriously stoking away at barbecues and gaz stoves, cooking Sunday lunches of singed meat, the smell of which hung in the air. A large party of East Europeans threw a beach ball around, and managed to carry off that singular look which I had thought only the British can really manage- looking pallid and unhealthy in bathing gear.

In the river, though, all was peaceful, apart from the wild insect sex that was happening among the variable damselflies. I went and fetched my camera, wading in up to my neck to get this picture and hoping to heck that I didn't fall over.

The Traveller's gearbox made horrid noises in third gear all the way there and all the way back, so I tried not to use third gear. Today I must look into replacing the gearbox. Oh dear. 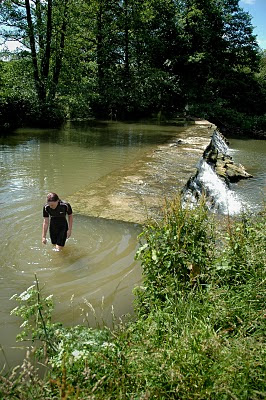