a bit of Kipling 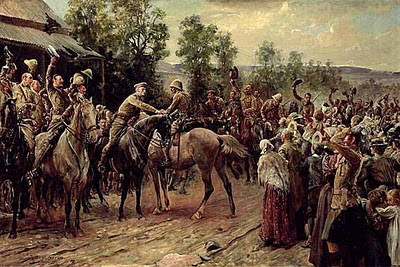 "Mr Kipling's gorn and written us a poem!"
There was a donkeyman on a ferry I used to work on, who got very enthusiastic when he saw my volume of the Collected Poems of Kipling, and borrowed it forthwith. And, in gratitude, he graciously presented me with a bottle of J-Lo perfume. It was a touching moment. I'm pretty sure he'd nicked it from the Duty Free shop. And it smelled like toilet cleaner. But the thought was there, and a v noble thought it was too. Kipling would, I feel sure, have approved.

There's lots of people in far-flung places, reading or reciting Kipling for pleasure, even now. Which is probably how things should be.

Back in the day, though, his poetry enjoyed a success probably undreamed-of by a modern poet. His Absent-Minded Beggar, written to raise funds for the families of soldiers fighting in the Boer War, raised between £250,000 and £300,000 (equivalent to £14-17 million today). As John Lee puts it, 'it has claims to have been the most practically effective poem in English.'

And on Saturday 19th June, in Bristol, there will be a Study Day, 'Following The Absent-Minded Beggar', which proposes to look at the hows and whys of it all. Be there!