another dance to the music of time 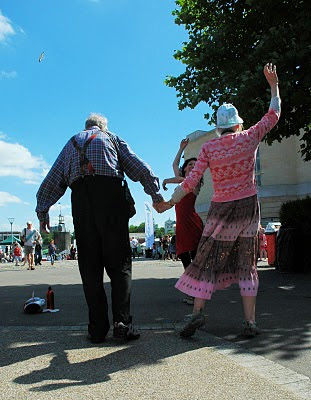 Here at Upside Down In Cloud, we are not at home to the World Cup.

Even so. On Saturday I was out and about on the bicycle, dropping in on the Harbourside, where the Festival of Nature was in full swing-a-go-go. Pleasure mad, they were, as you can tell from the photograph. I caught up with some old friends, and narrowly avoided being signed up for several causes- "I 'ave recruited 6,000 people," said the french chap at the Wildlife Trust stand, and I could well believe it, as I found it very hard to escape the glittering eye that he'd fixed me with.

On Park Street there were young men clutching cans of beer and festooned with St George flags, shouting at each other. I smiled at a bunch of them sprawling out of a bar, and one instantly called to another, "Yer in there!"

"Not a solitary chance, maggot," I thought as I carried on.

I have now learned what a vuvuzela is, and heard one... well, heard several, actually... on the radio. What a horrid sound. I wrote this.

A clarinettinst from far Venezuela
Loathed the tootings of the vuvuzela.
"You can't play baroque on it;
Please put a sock in it.
I'd far rather hear a zarzuela."

Email ThisBlogThis!Share to TwitterShare to FacebookShare to Pinterest
Labels: Bristol