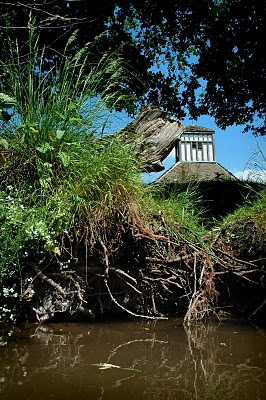 This is the weather for bimbling, and bimbling was what I did on Saturday, after handing Katie over at Checkpoint Chav, deep in the West Midlands motorway network.

So I headed for the Malvern Hills, which manage to look even more dramatic in close up than they do from the M5, whence I usually hail them in passing. I didn't try going up and over the top, though, as I'm being kind to my gearbox. It is surprisingly easy to get along without using third gear, but even so, you can't be too careful...

...and then through Herefordshire, and to the flanks of the Black Mountains, and Llangua, on the bank of the Monnow. Unusually, the village is on the east bank but is in Wales, with Herefordshire and England on the West bank. The border follows the river, and the river, in these parts, follows its inclinations. As far as Monmouth, anyway.

The church stands on its own, some distance from the village. It's very small, but, on this hot summer afternoon, bustling with activity; there was a wasps' nest on the bellcote, and the wasps were zooming to and fro in a piratical manner. 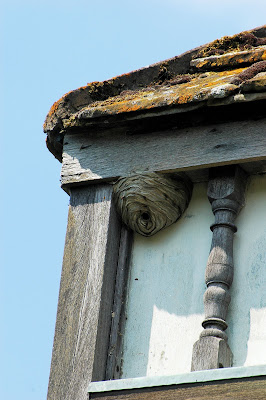 A buzzard drifted by. I walked along the river, admiring the big brown trout that glid silently through the brown water in the shadow of the trees. Sand martins flitted in and out of their nests in the sandy bank at the river's bend. A kingfisher swooped away from its branch as I approached. A train passed invisibly, on its way to Abergavenny from Hereford. There was an outbreak of bleating from the local sheep.

I slid into the river and swam gently against the current for a while. The water was just cool enough to be refreshing and welcome after the heat of the afternoon. Then I got my camera and balanced gingerly back into the water for the photograph up there at the top. Then I splashed out onto the opposite bank, inadvertently trapping a huge shoal of tiny trout in the shallows; the water frothed furiously as they tried to evade me. So I circled round, and shooed them back out into the deep water.