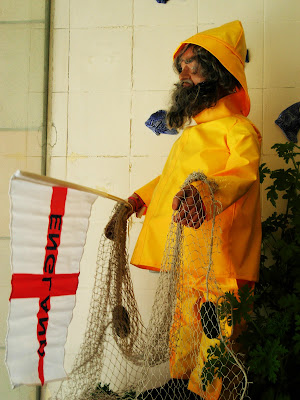 They're mad for football in Henleaze, let me tell you. The supermarionation fisherman, in the window at the fishmongers on North View, is now waving a shiny new Engerland flag (rather more stolidly than enthusiastically, though, it has to be said). The fishmonger explained that he had been presented with the flag by his neighbour, the Portuguese hairdresser.

And here is a recreation of Montgomery's triumphal advance into Benghazi. 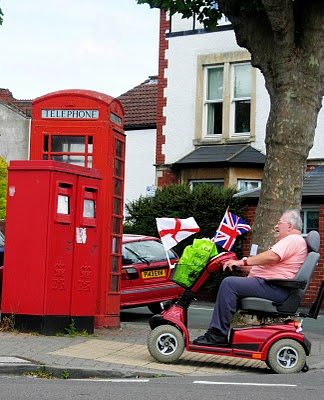 can you see what's wrong in this picture?
..after I had taken this photo, I saw that I was being observed by a man of indeterminate age, sitting on a bench behind me. According to the insignia on his baseball cap, he was an Admiral of the United States Navy. Perhaps he was on shore leave.

"Do you often take photos of phone boxes?" he asked.

"Oh, I take pictures of the usual things," he said, without explaining what they were.

Another vuvuzela limerick, and then it'll be out of my system.

A young man blew his vuvuzela
Too loud and too close to a sailor.
His come-uppance, it's reckoned,
Was like Edward the Second's,
Or a victim of Vlad the Impaler.