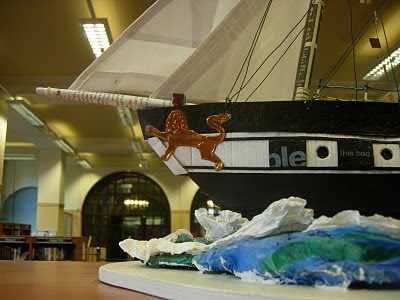 questing forth
Every other time I go to see Prof Levy, my favourite endocrinologist, I have an adventure. Two years ago, it was the Drongo Bike Thieves. Before that, it was the Cat Litter Chavs. This year, it was the Yoots In Dad's Car.

Down in Broadmead, having a quick look round before my appointment, I was about to cross Horsefair, a road through central Broadmead that has for some time been closed to general traffic. A prohibition which has revealed a startling epidemic of disabilities among the owners of Range Rovers and similar prestige vehicles, which can often be spotted carrying their evidently infirm owners along this thoroughfare.

A little red car was coming as I prepared to cross the road; I think the throttle linkage must have been sticky, because it was going VROOOM BRRRUUUMMM in a quite snarly way. Perhaps it was intended to impress the shoppers at Primark.

I carried on anyway. One mustn't be deterred by these things.

The car slows. There are three Yoots in it. The driver calls out "Did you see a zebra-crossing there?" He waves a finger at the zebra-crossing free place where I had crossed.

I point back the way he came. "Did you see the No Entry sign back there?"

He mutters some vaguely obscene things and drives off...

It was nice seeing Prof Levy again. And good to see that my blood is doing what well-regulated blood should be doing.