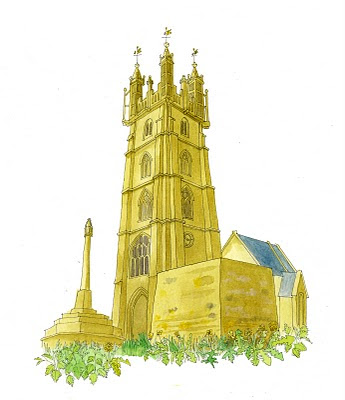 Here's Dundry church, up on the top of Dundry Hill and appropriately dedicated to St Michael. The tower was built by Bristol's Merchant Venturers 'as a beacon for sailors', as Pevsner says. It would be of doubtful use as a navigation beacon; but it is certainly a landmark, being visible for miles and miles from its high position, a hundred feet up the hill. Pevsner's a bit snooty about the aesthetics of the tower, reckoning that there's too little relation between the four stages and the parapet. As for the Victorian church attached to the tower, that is described simply as 'without merit'.

Fair enough. I suppose that in its way, this is a folly; something intended more to be viewed from Bristol and the Avon than to be worshipped in. An exercise in ostentation rather than piety.

In the foreground is a great block of Dundry stone. The local oolitic limestone was highly-regarded as a building material, and it was widely used; for St Mary Redcliffe in Bristol, and, further afield, in places including Cardiff Castle and Dublin Cathedral. This block in the churchyard was for display purposes, presumably, so that prospective clients could be shown what was on offer, just as the adjacent church was an example of what you could do with it.


I was up at three o'clock, finishing off this picture while listening to God's Revolution on the radio; a really good dramatisation of the English Civil War. Cromwell is busily suppressing the Levellers just at the mo. Familiar stuff if you've read about the French or the Russian revolutions... but it happened here first...