back to the Lush Places stuff 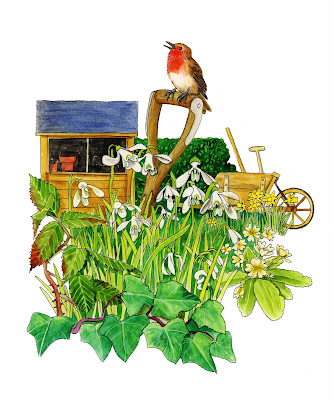 wrong season, but hey, it's a robin.... illustration from The Case of the Curious Crow
Shortly after my last post, Andrew Marr made a rather touchy criticism of ('some') bloggers, describing them as "socially inadequate, pimpled, single, slightly seedy, bald, cauliflower-nosed, young men sitting in their mother's basements and ranting...". As opposed to proper journalists, who are knights in shining armour in a relentless quest for Truth, of course. Listening to him on the radio, he sounded quite peeved, and brought to mind a dinosaur blustering resentfully about the annoying mammals making a nuisance of themselves around the place.

As I said, blogging has given me a (fairly small) voice, in matters where I have felt misrepresented, marginalised or ignored by the mainstream media. And for that I am grateful. There will always be windmills that need a bit of tilting, after all.

And in between the windmills, a few Lush Places.

I was in Sarah's garden on Sunday, helping take the washing off the rotary dryer, and in the bush next to us was a robin, singing ever-so-quietly, scarcely audible from more than a few paces. It was a big contrast with the robin's usual song, loud and clear. I wonder if that was what Keats was describing in his Ode to Autumn-

...with treble soft
The redbreast whistles from a garden-croft

I thought the swallows had been long gone; but I did see two battling against a strong west wind at Portishead, a fortnight back, making their way along the coast. Last week we went down to Dorset, and stopped for breakfast at the airfield cafe at Compton Abbas, south of Shaftesbury. It had been a blowy, rainy night, and the rain was clearing away, and the day was looking promising.

And the row of beeches on the ridge behind the airfield was alive with swallows, swooping close around the trees, and spreading out over the ridge, flying around the parked aircraft. Like us, they'd stopped for breakfast on their way south. 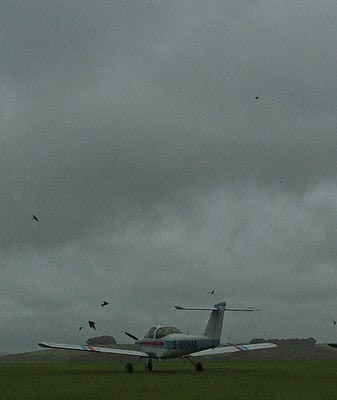 On another day of torrential rain, I was driving along the side of the Downs where the roads are accompanied by avenues of conker trees, and the conkers are littering the ground and crushed on the road where they've been run over. And the gutters were running with great lumps of foam. I thought at first that someone had been careless with the detergent. But it was everywhere that the conker trees were. I wondered if there was a connection. And it seems that there is. "Conkers make wonderful foam!" -sounds like a rather nicer way of making foam than the stuff we used to use for firefighting at sea; that, apparently, had cow blood in it. And it ponged, something horrid.

Wonderful things, conkers. Apparently, they won the war for us too.