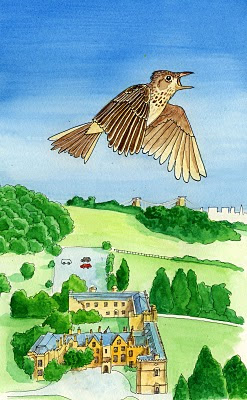 Here's a skylark, doing what skylarks do, over Ashton Court, which is just over the Avon Gorge from here in Bristol. And that, I'm pretty sure, is the last picture for The Case Of The Curious Crow.

I've been worrying about what to do about the Traveller's gearbox. At least I have a better idea of what the problem is; I drained the gearbox oil and found this. 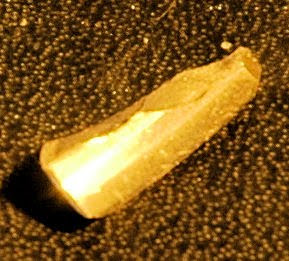 It's a broken gear tooth. And I know that you should be careful about accepting an answer to a problem if it is handed to you on a plate, just in case it is either the wrong answer or not entirely the right one. But it seems to work, in this case.
So I am driving the car (when I have to) carefully, and avoiding using third gear. And I've rung around several companies who deal with Moggies, and found that there is a bit of a shortage of gearboxes at the moment; I guess it is all those Mogs that spend their winters indoors, coming out to play in the sunshine and then breaking down.... anyway, someone who rebuilds gearboxes in Hampshire is going to send me a reconditioned one, and a mobile mechanic in Bristol, who specialises in Moggies, is going to change the gearboxes over. Which may not be very Zen, and is the first job I've not been able to do myself; but it's a bit of a relief too.