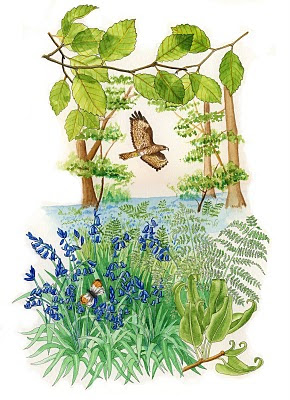 While the country waits to see what sort of government we're going to end up with, I've been worrying away at this picture, which seemed to take for ever. It's for one of Geraldine Taylor's stories, describing a buzzard ghosting through the woods. I remember encountering a buzzard in woodland, too, when I was walking with Richard down a sunken track from the top of the Kymin. The buzzard seemed to fill the track with its wings, as it dropped down ahead of us.

The Kymin is a hill overlooking the Wye, Monmouth, and all the country westwards to the Black Mountains. It's a nice spot, and in the early morning the sun casts your shadow far to the west: 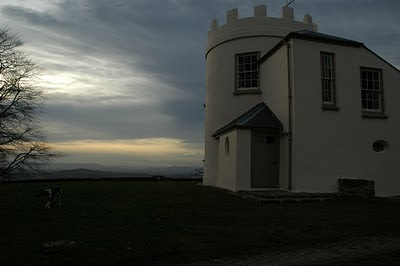 Standing on the Kymin
My shadow's mostly English
But its head's in Wales.
(that's an evening photo, of course, but bear with me; it was a nice evening)

New things learned from doing this picture: the shadows that young beech leaves cast through each other, so that they're like those Venn diagram things.
Most worrying bit: trying to get the sense of the blue sheen in woods when the bluebells are out. Trying to get the bluebells in the foreground to stand out.