With the snow fall the other night, there was plenty of evidence of our local foxes; there were prints up and down the road and the back garden. Though I have yet to hear foxes screaming in the night in this part of the city; while my friend in Clifton says that she has heard them often, recently. It's a good sound for the winter, a feral sound cutting through the night.

The roads are icy, so I've been walking or cycling when I want to get to places; Uncle Jim always reckoned that the best vehicle for snow is a motorcycle combination, and when I had a combi I had to agree with him. The narrow wheels cut through the snow more readily than wide car tyres; and you can do controlled pirouettes down the road, if it takes your fancy... sadly, the combi's long gone, and I rather missed it, these last few days.

I finally got the Trav warmed up and defrosted ready for some vital errands, yesterday. Stuck a big piece of cardboard down the front of the radiator, to help keep the temperature up, and scraped and wiped until the windows were finally clear; there was as much ice on the inside as there was on the outside.

Then I looked up and saw that blue sky was appearing above me, and realised that the fog was lifting (or rather, descending), which would hopefully leave the house riding above a sea of mist over the city. So I dashed up onto the roof... 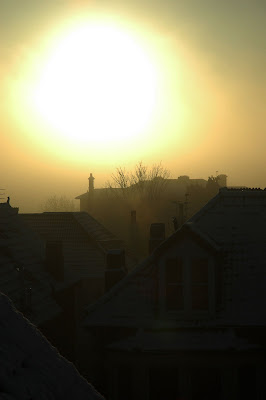 Out and about, there was solid traffic converging on the city centre as people got into a spending frenzy for Christmas.

I was approached by two women, one with a pram, asking for money. I think they were Romanian gypsies. I gave one of them two pounds. She then retreated, and the one with the pram continued asking for money, pushing forward a piece of paper explaining how needy she was and gesturing to the baby. I told her that I'd given the money for both of them. A cropped-headed young man angrily said, "You shouldn't give them anything- they were here yesterday." Which produced mixed feelings; I wanted to do the opposite of what he'd said, because he was hateful; but I also resented being asked for more. 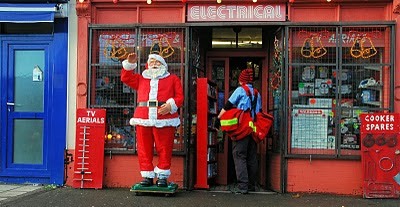