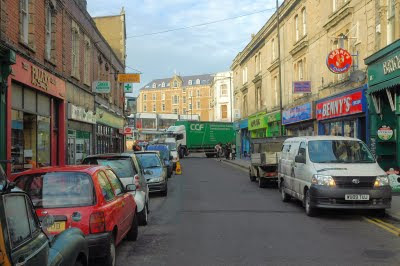 A normal morning on Cotham Hill. The usual vans parked on the double yellows. In the background, a lorry is lurching forwards and backwards, manoeuvring into the narrow entrance of the builders' yard. Pedestrians seize their moment and dash through the gap when it offers itself. Nobody is helping the driver out by waving him back, watching his blind spots. It's about 10:30; the chaps at the yard are probably having a cup of tea.

Forty eight hours earlier, just about to the minute, a cyclist and her bike were crushed under a lorry at this exact spot. It was a bigger lorry, an articulated one; it was swinging into this same entrance when it caught her. Of the comments on the Bristol Evening Post website, a lot of them seem almost to gloat that a cyclist has been badly injured, assuming that she was doing something that she shouldn't have been doing, and reckoning that she'd got what was coming to her. The general attitude is: lorries are dangerous, and the drivers can't see very much from their cabs, so keep well clear or you've got no-one to blame except yourself.

When I worked on a ro-ro ferry, lorries were not allowed to move around unless under the supervision of crew members with hi-vis gear and radios. And yet it is apparently thought perfectly acceptable that an articulated lorry should be allowed to manoeuvre through one of the busiest parts of town without any sort of control or assistance.