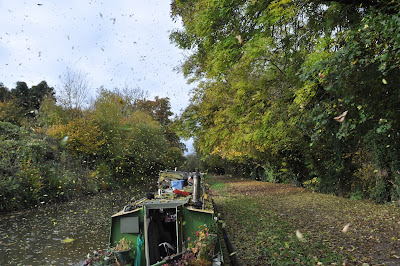 After so many days of still air and sunshine, the wind got up and the air was alive with all the leaves that had been waiting for the hint. They blizzard across the towpath and rafted up on the water so thick that passing boats had to keep going hard astern to clear their choked props.

Then there was the first proper frost, and the next day, though the wind had died completely away, the leaves just kept on dropping; making enough noise in the still valley to sound as though a large beast was rustling through the woods.

At dusk the vixen crosses the field opposite, and presently we hear her screaming on the hill. Well, I'm guessing it's the same fox.

Owls are calling at twilight, then around dawn, and sometimes they wake up around one o'clock in the morning and have a natter, too.

And after a week or so you suddenly realise that the trees are almost bare. 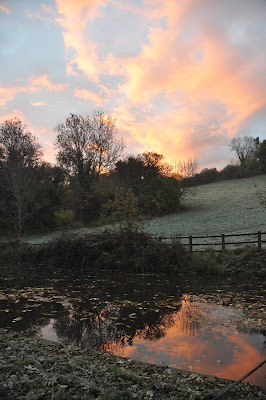 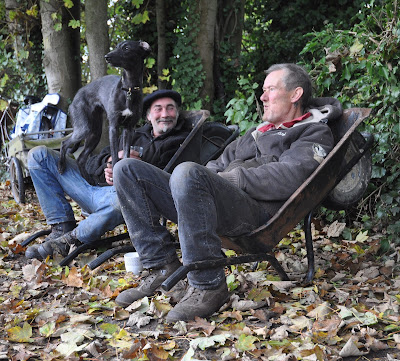 Here's the Dangerous Brothers, dropping some firewood off. I've just done a flyer for them. I was helping with some Leylandii in Bristol last week, horrid job, and as we drove back we were brainstorming names for the business. "....local branch?" I suggested. "Special Branch!" said Jim, and it stuck.

Email ThisBlogThis!Share to TwitterShare to FacebookShare to Pinterest
Labels: canal