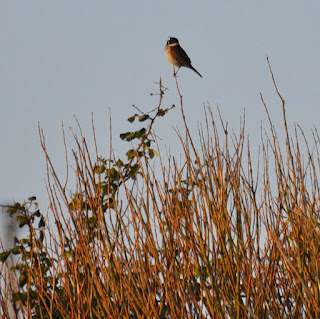 One day, you hear a few errant notes of birdsong and think "surely that was a reed bunting?" -and then it shuts up and you tell yourself that it was only warming up, and maybe tomorrow it will be singing lustily and with good cheer.

And so it comes to pass. And all along the towpath at Sells Green, that next May morning, the reed buntings were singing their slightly ragged but melodious monotones, obligingly perched in the tops of bushes, the better for us to admire their black balaclavas and white silk scarves.

It was time to be moving on, though. We moved down to the water point to refill our tanks. As I faffed around with the ropes, a vaguely familiar boat glad slowly under the bridge. It was Henry, who I'd last seen last summer, when he was heading up to a marina beyond Devizes. He has sufficient health problems to make getting on and off the boat difficult, which is why he took up a place in a marina. But, as he said at this reunion, "I tunnelled out. Bloody water kept getting into the tunnel, mind...". Some folk like living in marinas. Electricity, facilities, not having to move around all the time, knowing that if you look out of your window you'll see someone else's window looking back at you.... Henry mentioned a visit from a mutual acquaintance, an outreach worker for the traveller community, who came to see him at the marina. She was refused access by the manager, because he didn't like the look of her... other friends were ejected from a marina because they were expecting a child, and the marina didn't want kids around the place... it is not a lifestyle I would choose either.

As I waited for the tank to fill and chatted with Henry, I saw a water beetle grazing the weed on the hull of my boat, like one of those cows you see in steep Devon fields that look like cow wallpaper. I'd not seen this sort of beetle before, so got a jam jar and looped it in, but messed up the sloping and squashed the beetle slightly, enough at least to kill it. Whoops. I felt bad about it, though not as bad as the beetle felt, presumably. 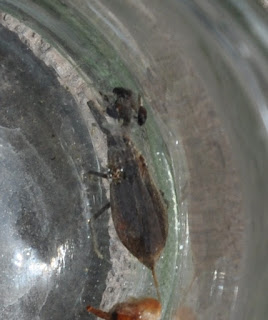 We went up through the locks from Foxhangers to the base of the Caen Flight; we lashed the two boats together and I drove while Chris and Jinny operated the locks. It's fun to do when it goes right, but it's a worry when someone entrusts their home to your tender mercies... We were back in kingfisher country, and one would zip by every now and then: further down the canal from Foxhangers onwards, they seem to desert the canal in the summer, preferring the nearby Avon, which parts company with the canal as we ascend.

In the basin at the foot of the lock flight a couple of boats were already moored; a hireboat stopping for the night before descending, and a tiny aluminium Sea Otter that was inconveniently moored slap bang in the middle of the moorings. There was enough room for Netty there, so they went alongside as I tied up against the much higher wall immediately before the lock. I wandered down to Netty. Chris was talking with the bloke off the Otter. I asked how long his boat was- "twenty feet" - and considered whether it might fit in a lock with our two boats. He was very strongly of the opinion that it wouldn't. "It's the sill, you see..." he explained, because obviously I needed locks explaining, silly giddy me. He went inside and closed the curtains. The tall pole on the foredeck with the television ariel on top told us that he had important things to do.

Chris said she'd asked him if he'd move his boat to allow me to come alongside and he'd told her that he was quite happy where he was. We agreed that we'd far rather not share the flight experience with him...

I was up with the dawn, drinking tea on the back deck, doing a roll call of the birds and catching up on my Facebook status - tightening the coupling 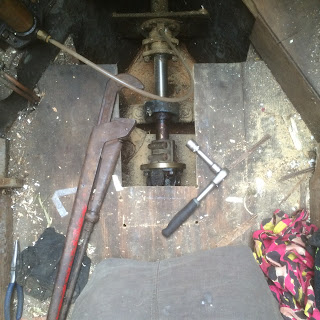 ...and tidying up the ropes and poles on the upper deck. Shortly after, a man with salt and pepper hair and chingrowth marched by with a purposeful gait. He wore a lifejacket and carried a boathook.

It was our neighbour, fearful lest I was preparing for the flight.

He swung open the bottom lock gate, and his wife chugged their little boat in, fouling the fenders so that he had to faff around with the boathook to get it through. Then he closed the gate. And they waited for the lock keeper to arrive to unlock the paddles so they could fill the lock.

"He really didn't want to share that lock!", we agreed...

Just as well. Come eight o'clock, they were off and away, Sea Otter man marching in the arms-akimbo way of the consciously important. And our friends were arriving to help us up the locks.

It was a good ascent. "Lock story" said Jinny.

"Every time up the flight has a story to it," she explained. "Today it was Otter man".

And so it was. 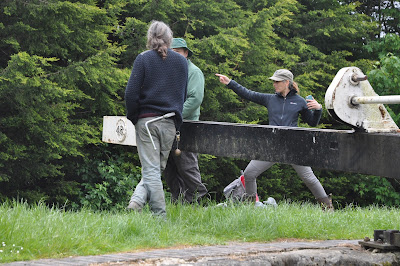 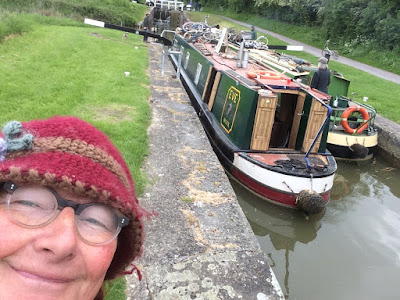