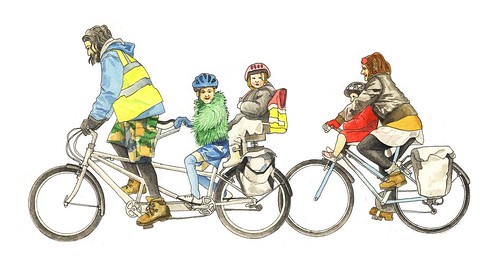 It was time to move on from Horse Field- we'd been there nearly two weeks, and a continuous cruiser- for that is what I am, dear reader- must stay no longer than a fortnight in any place. It's no hardship, especially on a bright May morning. At eight o'clock sharp, the crew of Netty and I fired up our engines, cast off, and passed up through the Bradford Flight. Bradford Wharf gave us the opportunity to empty our toilet cassettes and fill the water tanks, which is always a relief after a couple of weeks, when you've been playing shower roulette (will the water run out before you've finished? Hurry! Hurry!).

As I passed the picturesque Airsprung mattress factory in the suburbs of Trowvewgas, a long straight stretched before me, clear of moored boats. So I opened up the throttle a bit. A pulsing rumble appeared, that I haven't heard before-  rumrumrumrum RUMRUMRUMRUM rumrumrumrum RUMRUMRUMRUM- like that. I throttled back. There was a clattering from somewhere below me. I put the gearbox into neutral, then blipped astern for a short while, as it sounded as though something had fouled the propellor. Going ahead, the noise was gone. But it kept reappearing. I worried. Either there was a lot of debris in the canal, not entirely impossible in Trowvegas, or there was a problem developing.

Nothing more likely to preoccupy me on a slow voyage, than the slightest changes in engine noise. At Semington I moored up and waited for Netty to catch up; they'd stopped at the boatyard in Hilperton to get some fuel. It gave me a chance to examine the various things between the engine and the propellor that go round and round. Everything seemed in order. I took off the weed hatch, and felt my way around the propellor. Clear.

Journey's end was a little beyond Semington, at Giles Wood, a lovely spot. I deep cleaned the bathroom; at Horse Field I'd been infested with gnats, and they'd died in droves in the bathroom. The flypaper hanging by the window had over 200 gnats stuck to it after a single day. Yes, I counted them.  The floor and the bath were littered deep with the ones who'd perished by the flyspray. I brushed them up, then disinfected everything, then did it all again, to be on the safe side. Then I showered, and did a wash, and finally started to feel clean again.

We were moored by the swingbridge. A row of willows overhangs the canal by the bridge mooring, and a great willow trunk had fallen, blocking off two thirds of the canal's width. It made for entertaining watching as hireboats tried to negotiate the tree and the mooring and the bridge. But something needed doing, and so why not do it? -A post on the canal Facebook group got Rick and Steve on the case, and on Saturday morning they turned up, both armed with a chainsaw to augment the one I've got too. I backed up the boat to the tree, tied it off, and we progressively lopped it and towed it to the landing, where we could hoist it out and cut it up. Great fun, but we were far too occupied to get a picture of the more dramatic moments. Boats, chainsaws, what could possibly go wrong? Nothing, as it turned out.

I was still worrying about that bloody rattling in the engine area. A bit of internet research suggested that it may have been the flexible coupling, between the engine and the gearbox, starting to fail. So I downloaded the manual for the gearbox and considered. And worried.

And then I had another look around, and noticed a bolt lying under the prop shaft, in a barely-accessible place under the boatman's cabin between the engine room and the back end. The bolt had fallen off the universal joint that connected the drive shaft to the last bit of shaft that goes out through the stern gland to the propellor. The other bolts were loose.

I cut an access hole in the floor, and replaced the fallen bolt, and tightened the others. Then I ran the engine on test. It seems to have cured the problem. 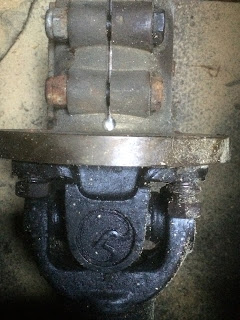 So I was free to enjoy the early morning. 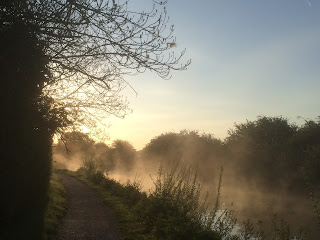 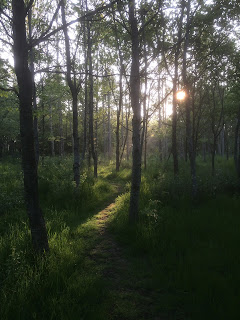