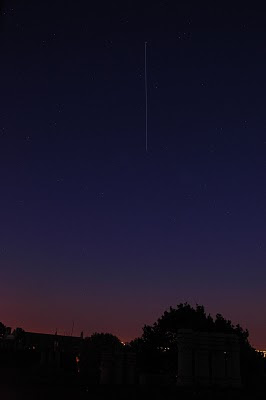 Funny. You wait ages for a space station, and then three come along at once.

Or at least... I saw the International Space Station for the first time a fortnight ago, and now I keep seeing it. Like a few days back, when Louise and I were trying out her telescope on what may possibly have been Jupiter (we never did quite find out. Telescopes are evidently more complicated than they look), and the ISS appeared out of the blue and went a-swinging by overhead. "Oh look, there goes the International Space Station," I said. Which is one up on Concorde, possibly.

Here in the photo is a 30 second excerpt of one of its journeys across the Bristol night sky, just before it descended into the Earth's shadow, by which time it was probably over Poland.

I've been thinking about people being stuck in places like that, lately. It's a bit like being at sea; you can't get off, and you all trundle along, all stuck in a big container together until it comes time for you to get off. The crew changes on space stations are a bit more dramatic than the ones I'm used to, of course, though I did nearly crash when I was driving home from Poole once.

I suppose it's a bit like that for those chaps who are stuck down the mine in Chile, too, though the view is not nearly as good.

It can be quite handy to have an element like that in your life; getting on with whatever it is that needs doing, having the occasional adventure, and planning what to do with your free time when it finally comes along. It gives you a sense of ending and beginning. Right now, I feel very unfocussed, and am trying to get things in order and come up with something approximating to a Big Plan. Or even a Medium-Sized Plan.

And there are of course disadvantages to being on board something with no chance of getting off. I've been covering old ground occasionally lately, referencing the nastinesses I experienced at P&O. And I've been having a run of nightmares, involving being trapped in that environment again. In one dream in particular, I managed to be stuck in a hospital that was also an RAF base that was also on a ferry. Funny things, dreams. Maybe it's better to just blank off that old stuff after all; obviously I'm not as over it as I thought.