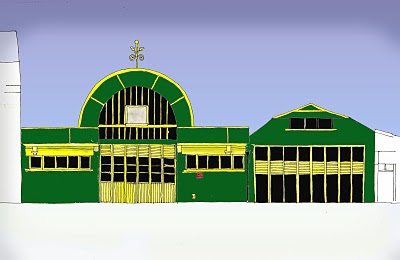 This is a garage in Weymouth, that I sketched in 1997, but never got round to colouring in properly. So I've just finished the job with the wonder that is Paintshop. And speaking of wonders, I wonder, too, if the garage is still there. It did look a bit unloved. I've had a quick virtual wander around Weymouth on Google Maps' Street View, but couldn't see it. So maybe it's been demolished.

Which reminds me of a pub just around the way from here, the Cock of the North, made famous (well, relatively famous) in The Young Ones, in which it appeared as the Kebab and Calculator.

...it used to be a really (well, fairly) nice pub. An unashamedly 1960s job. Circular, with the bar in the middle. Light and airy, with the big windows. And then it got made over as a sort of bogus Edwardian thing, and it's all gloomy and (last time I was in there) pongy with the ghosts of a million cigarettes and pub lunches. I suppose that the pub's problem, along with the garage's , was that it fell outside the parameters of Buildings That People Want To Preserve Because They Are Very Much Of Their Time.