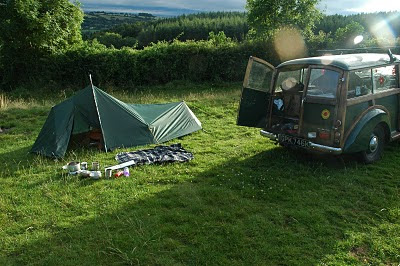 I thought it would be a Good Thing for Katie to have a go at camping in an adult-free environment. Or something approximating to that. So we bundled into the car with three of her friends and went to somewhere in the Wye Valley area that I'd heard good things about. I dumped the children and their gear on a nice spot on a hillside, and looked around for a place for me. Katie made it clear that she wanted me out of sight...

...so I settled in, and then after a while I got a visit asking for help in putting the tents up... and then later in the evening another request for help in lighting a fire. It was a bit of a jolt, and I had to recall that knowing how to do these things doesn't happen on its own. It has to be learned. And a modern childhood is a lot less wild and free than mine was.

So we got the fire going, and it got dark, and they got the marshmallows out. I toasted one myself. It tasted smoky and burnt-sugar-y, and not entirely nice. But it was hot and gloopy and burned my tongue, and it was all part of the fun. I left them to it. I felt a bit left out of it, but that's just one of the penalties of being ancient.

I woke thinking it was day again, and opened the tent flap. There was the full moon, about to pass behind the huge beech tree I'd pitched my tent close to. There was a lot of twittering of house martins. It was 4:00. I wondered if the brightness of the moonlight had stirred the birds and the insects into action.

Later, after the proper day had broken, I was brewing my hot choc and watching the martins swooping around the beech tree, very close in and mostly to leeward. They were being very acrobatic. It was still too early for the insects to be venturing further afield than the close environs of the tree. A swallow swished by at grass-top height.

I walked in the woods, over to the Devil's Pulpit, a stone pillar rising out of the side of the valley overlooking Tintern Abbey. I took my sandals off to see how quietly I could walk. I could walk almost silently, as it turned out. But I didn't see or hear any deer. Lots of nuthatches. A great tussling of dead leaves that resolved itself into a blackbird. A young buzzard, and a family of ravens, all heard through the dense trees. A flash of swooping bird through a beam of sunlight, accompanied by alarm calls from all around; was it a sparrowhawk? So much of what happens in woods is heard rather than seen. A fresh badger scrape at the side of the path. A hazel nut falling by my feet; I wait, and a squirrel saunters out of the tree heading upwards. 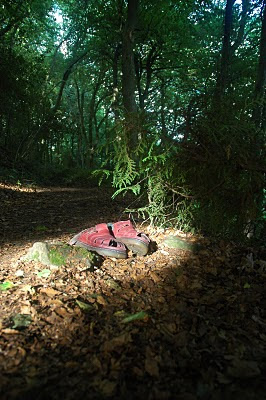