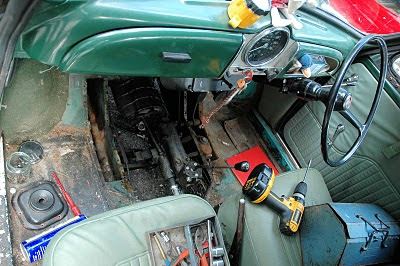 So what do you do when your gearbox starts making horrible noises in third gear? -well, after seeking advice over on the Morris Minor forum, and draining the gearbox oil and finding a tooth in the mix, I kept on running the car carefully, avoiding third gear. Which can be a bit of a bore on long uphills.

I also started looking around for a replacement gearbox, as overhauling the gearbox myself would have been quite time consuming and fiddly. It proved a bit difficult to find one, as the usual suppliers didn't have anything available- there seems to have been a bit of a run on Moggie gearboxes lately. I finally found one on Hayling Island, where John E Evans specialises in rebuilding gearboxes and happened to have a reconditioned one available.

I also needed help with the changeover, as I don't have the lifting gear available, and it is a bit of a daunting job anyway when you're busy with other stuff too. So, after reading some recommendations on the MM forum, I got in touch with Russell, who trades as RTG Services. And he came and did the job on the road outside. I helped a bit (most of the dirt under the fingernails has finally gone now....). We started on Monday, and finished on Tuesday morning- Russell had to combine his mechanicking with childcare on Monday. A good combination, in my unbiased opinion.

It was good weather for working outside. The neighbours stopped and chatted as they passed. Several of the more elderly ones got a bit nostalgic for their own long-departed Morris Minors. Russell described how some of the locals where he lives are a bit less friendly- "A young lad pulled a knife on me outside the house. So I took it off him. I said "Look, if you're going to pull a knife you've got to know how to use it, don't just wave it around"." Russell is quite big and strong, you know. 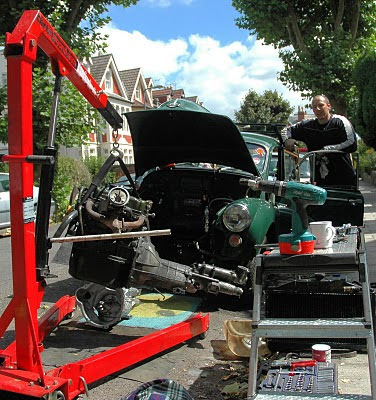 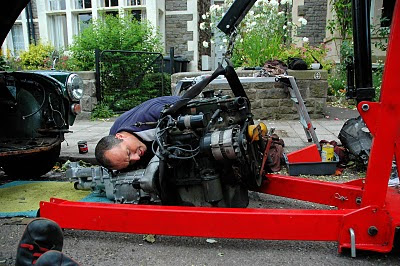 And now the car is up and running again. I took it down to London and back, just to make sure.

Thank you, John and Russell. They were both really helpful, and cheerful and friendly too.