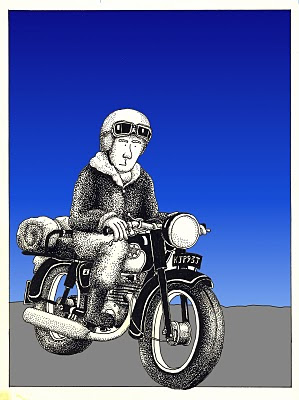 We used to have a bit of an infestation of bikers, in the basement of the big house in Portsmouth I used to live in. Nice chaps, though their taste in music was a bit narrow, and they weren't all the shiniest apples in the bowl; I remember one watched an ad on TV for Shredded Wheat, which claimed that 'no-one can eat three' .

"I could," he said, and suited the action to the words.

And then there were the lads from West London whom I sailed with in the North Sea back in the 80s. They were mostly into Laverda Jotas and Kawasaki Z1000s. Nice chaps all of them, and most of them still alive too. There were always great plans being made for getting bigger, better, faster bikes (I peaked with a dinky little Laverda Alpino, personally). And bike magazines lying around everywhere.

One of the magazines had small ads in the back, which were reputed to be a sort of gay dating site. So, for a joke... some of the lads put in an ad on behalf of young K. And, lo and behold, he got a letter in reply, complete with a photograph of a middle-aged bald chap in one-piece leathers unzipped far enough to show off the winky that was protruding....

I met up with the chaps at a reunion last year. It was a happy occasion, and entirely free of discomfort about my transitioning. That was simply not an issue. Because we're grown-ups. You know.

Someone pointed this out to me yesterday. It's on the website for SuperBike, one of those magazines that we used to have lying around on the ship.

Finally we have good news from Yamaha in WSB. We reckon if you have the attributes (i.e. you are not a bloke/transsexual/transgender type) you're in with a shout! ...Great news if you are one of James Toseland's many stalkers or have a hankering to get up close and intimately personal with Cal Crutchlow! A press release from Yamaha confirms that – assuming your not a bloke who dresses as a lady – you could be in with a chance of wearing skimpy kit and holding a brolly. Now read on...

Well, quite. And of course all motorcyclists are heterosexual men without gender issues, too. And bikes are never used as beards. Never, you hear?

Do you get the feeling that those very manly journalists at SuperBike may be just a teensy bit insecure?