swimming in the Thames 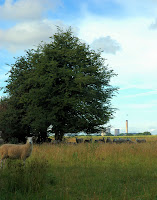 With the gearbox newly installed in the car, it seemed only proper to give it a good run.

So I took it down to London, and managed to pick up Richard somewhere along the way. We headed out to Oxfordshire, and took a walk along the Thames. It was extremely hot, and swimming in the river seemed a sensible thing to do.
"There's a place just here," said Richard as we descended to the river bank from the bridge "-or there's a nice place a bit further down." 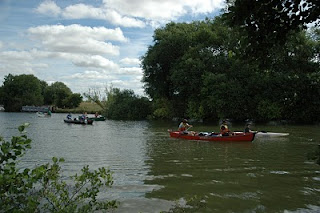 "How much further down?"
"About forty minutes"

We passed some places that would have been likely contenders for swimming if they hadn't already been baggsied by herds of cattle, which stood up to their bellies in the water, occasionally sticking their noses in and snorting. The calves formed their own little coterie of disaffected teenaged calfness, under a hawthorn tree on the river bank. We steered well clear of them- Richard is not really a cow person.

"I wonder if I got the distance right?" said Richard presently. "When I'm running, it takes about half an hour, and I reckon I run about 1.3 times faster than I walk. Or maybe 1.5 times. What do you reckon?"

"We'll time it, " he said, taking off his watch. Richard's watch has, of course, got a stopwatch on it. Goes with the territory.

"I'll run to that tree there, and when I get there I'll raise my arm. You stop the clock, then start it again when you start walking, and we'll be able to compare."

So that's what we did. It was a very fiddly watch, but I got there in the end.

"Fourteen seconds, and thirty seconds", I pronounced, when I'd caught up with him.

"Hmm, about twice as fast then. So it's further than I thought."

Red kites called out and circled above the meadow. A girl galloped by on her pony. She put me in mind of a gaucho, riding across the pampas. If gauchos were young girls and the Argentine pampas had Didcot power station slap bang in the middle, you simply would not have been able to tell the difference, on this breezy hot Saturday morning.


We finally found a place where you could slip into the water. There were a few narrowboats and cabin cruisers not too far away, but not too close either. and their crews were obviously having a bit of a lie in. 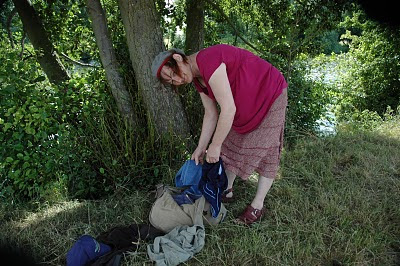 Richard slid down into the water and edged out. The bottom was a little muddy but firm beneath that, then shelved deeply and suddenly. He launched out. I followed. We swam to the other side, and under a great hanging willow where a swan was busily nibbling the leaves. If you were careful, you could scramble out, using the roots in the bank as steps. The river bed underfoot felt quite horrid; crunchy but fragile stuff that felt as though you were treading on small creatures; and great bubblings of marsh gas whenever it was disturbed.

It was cool and peaceful under the tree. Someone had had a bonfire there. It would have been a good place for a late night party, we agreed. 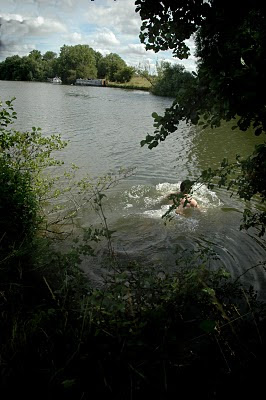 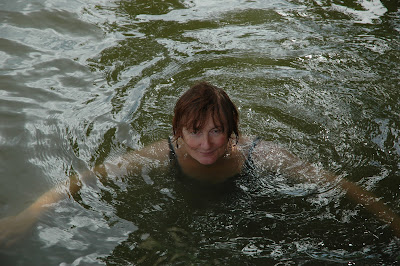