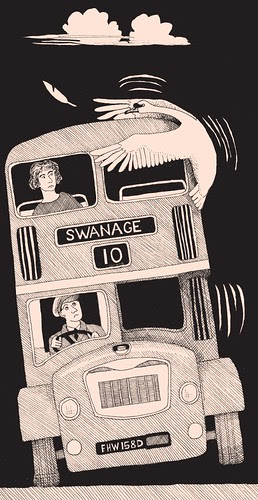 Blooming weather. It's been raining hard most of the day. Got out bright and early to the Downs cafe, where I met up with the naturalists. Nick Winn, the Peregrine Poet, has had a poem selected for displaying on buses in Bristol, so he was pleased, and we were pleased for him.

I don't know which poem it is, though, so I can't put it here. It got me thinking about poems for displaying on Bristol's buses, which have long been notorious for being expensive. And this was the result

How much, did you say?
-I want to go to Broadmead,
Not bloody New York.

..more agitprop than haiku, I suppose. I like this one much more, though it's about trains rather than buses. And I'm not going to change it now.

I can't hear it, though
I can see the crow crowing
Through the train window

Home again, I got down to some Useful Tasks. First, I fixed the strap on my favourite Doc Marten sandals, thus

...and am now ready for the summer.

And I made some more compost bin liners.

Bristol issued everyone with compost bins last year. The contents are collected weekly. I am very much in favour of the scheme, as I have no compost heap of my own. Unfortunately, keeping the bin clean is a bit of a bother. So I have taken to making liners out of old newspaper stuck together with wallpaper paste. I make a load of them in one go, thus

...which stops the bottom of the compost bin going manky and horrible, and saves loads of time and effort sluicing it out.

Next week: washing up, a joy for life. Or maybe not.