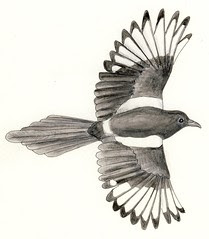 So, the last chapter in the story of the magpies who nested in the plane tree at the front of the house.

On Wednesday, the single chick left the nest and spent a while hopping around on the road, before taking refuge in a bush. The parents spent the day to-ing and fro-ing with food, flying in and perching on ledges on this house and the house next door to check that all was clear, before dropping down to the chick.

Yesterday morning I looked out at first light and it was still in its bush, and all was quiet.

An hour later there was a huge kerfuffle going on. I went to the front room window and saw the magpies on the pavement angrily chattering and facing off a fox, that was sitting bolt upright on its haunches looking as though it was wondering how best to preserve its dignity. It decided on withdrawal, and sauntered off looking insolent, pursued by magpies.

In the middle of the road was the chick, apparently lifeless.

I went out and checked. Yes, the chick was dead and toothmarked. I moved it to the garden wall so that the parents could say goodbye properly. For the next hour or so they fluttered to and fro, chattering and pecking at the corpse to try to get it to respond.

After a while they went away.

In the evening, Katie and I went out for a last walk on the Downs as the sun set. On our return we saw a magpie perched silently on a rooftop at the end of the road.

A short while later there was more chattering at the front of the house; the two parents were fluttering between the nest, the road where the fox had dropped the chick, and the bush where it had spent its last day. They spent some time doing this.

This morning the chick was gone. I guess the fox had returned.

Email ThisBlogThis!Share to TwitterShare to FacebookShare to Pinterest
Labels: magpie