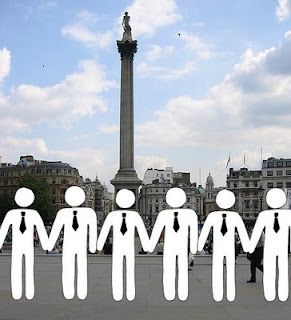 
Some people question the propriety of adding T to LGB. "Transsexuality is a gender identity thing and the other ones are about sexual orientation," they say. And of course they're right. I happen to think that we've all got sufficiently common cause to be able to unite. And recent events suggest another good reason for Ts to be in the same room, especially with the Gs: "Keep your friends close, and your enemies closer", as the Chinese general said.

Not that I view all gay men as enemies, of course. Far from it. Unfortunately, there seem to be some who have attained positions of power in equalities groups, who, now that being gay is pretty socially acceptable (or even desirable), want to distance themselves from other, less well-heeled minorities. For some are more equal than others. Thus Ben Summerskill and Stonewall's shabby performance over the nomination of Julie Bindel for their Journalist of the Year award, and the re-writing of history that's been going on in gay circles to eradicate the trans presence in the original Stonewall.

Let's call them Gays In Ties. Because it usefully lends itself to an acronym.

Here's a typical example, culled from a local forum where there has been discussion regarding T inclusion in an LGB group.

The gay community are borderline weirdoes in the eyes of the mainstream heterosexual community, but if the forum encompasses the Trans community into its constitution then it could be catastrophic to the forum. So I’ll let the Forum Members decide whether or not, our weirdo status will get better or worse?

Love you too, little man. Worryingly, no-one called this particular GIT out on this remark.

Now then, to London Pride. At last year's event, there was a bit of a hoo-ha when the Pride stewards refused to let some transsexual women use the women's toilets. A transsexual woman was subesquently assaulted in the men's toilets. The Pride GITs seemed to think that the trans people involved were somehow at fault. I covered the "Toiletgate" business at the time, starting here.

So this year, it seems that Pride have decided to organise the T element of the event themselves, assisted by one Diana Taylor. Diana has (they say) for many years been the Trans advocate for Pride and has assisted pride London in some very complex issues and is very well respected and very well connected across many Trans circles. Oddly, no-one in the sort of "trans circles" I move in seems to have heard of her. Must be in the wrong sort of circles or something.

At a meeting with interested parties including Translondon last week, it was announced that the trans contribution to the march would be a float at the back of the procession, with the theme of "Priscilla Queen of the Desert". The procession is to be headed, apparently, by another float with the cast of the stage show of the same name. "Priscilla at the front and Priscilla at the back," as the person from Pride described it, to a presumably gobsmacked audience.

Translondon have voted to boycott the event. And who can blame them?