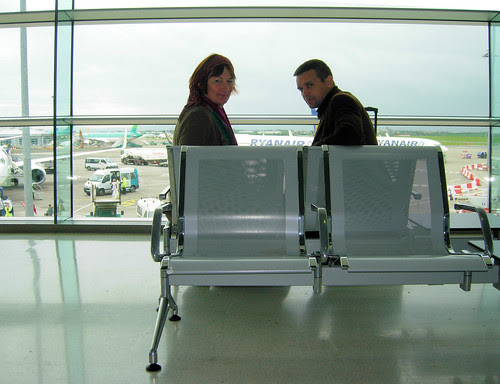 So what with Richard coming down with the Black Death, we had to cancel the Birmingham City Uni gig, as his presence would have been essential. We tried to change the various tickets for the various journeys that would have seen us go to Birmingham, then Bristol, then in Richard's case to Mitteleuropa. And found that the flip side of travelling on the cheap is that you can't change things cheaply.

So we got to Birmingham, then hopped onto a train to the city centre and made our way to the coach station.

"When is the next coach to Bristol?"

"Oh, you've just missed one. There isn't another till 6:30 this evening"

Damn. We sat and conferred. In the background the Tannoy was listing the various departures. We both heard "....for Paignton, calling at Bristol...."

A sharp dash to the coach. I asked the driver, "Can you take us to Bristol?"

"If yeh had a ticket ah could," he said in a very Geordie accent. "But ah'm just about to go. And ah'm no waiting."

Richard put all that rugby training to good use, dashing over to the ticket desk as I stood outside the coach trying not to look reproachful.

We made it, and the driver cheered up no end when we presented him with the tickets. Well, cheerful for a Geordie anyway. He even called me 'love' when he helped get the bag in the hold.

Home again, Richard got on with finding a Richard Substitute for the Friday reading at the Tobacco Factory. His old college friend (Richard seems to have old college friends absolutely everywhere), James Russell, who lives in Bristol, agreed to do it. James has just done a very nice book about Eric Ravilious, one of my painter heroes. And he wrote How To Turn Your Parents Green, which earned him the honour of being described by the Daily Mail as an"eco-terrorist". High praise indeed. 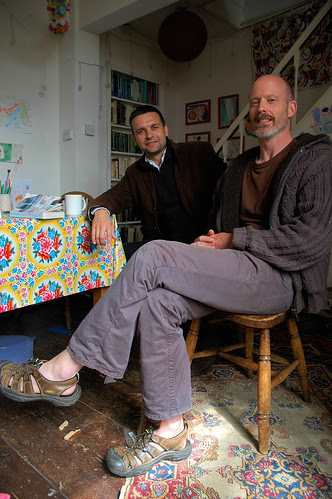 Richard and James confer
So all that was left to do was to drop Richard at his mum's at a secret location in the South of England, and catch up with the paperwork.

Here are some bits and pieces left over from Dublin, which seemed too good to waste. 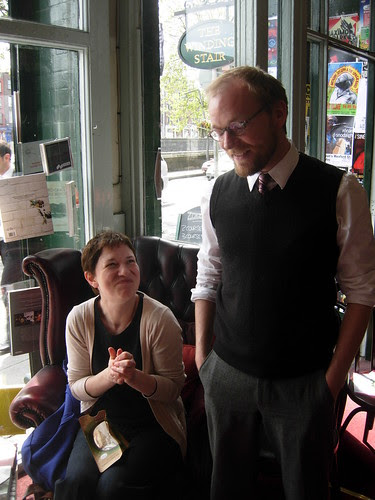 Regan at the Winding Stair

...and some choice quotes:

"The aircraft is not due to land until 0740, due to the late arrival of the aircraft"

"Toilets for this flight are two, and they are situated at the rear of the aircraft"

..and my favourite of all the Dublinisms I heard. This is Y, describing a dress with a sort of bustle on it that she saw in a shop and really quite liked: "...with a fecking great bow on the arse... it's the dog's..."