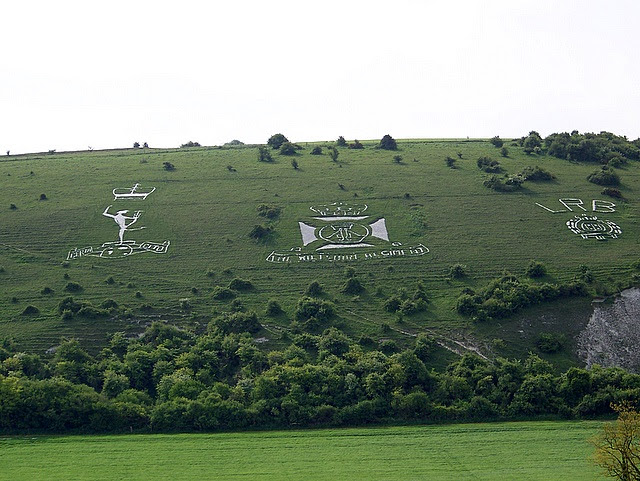 I was hitching along the A30 from Shaftesbury towards Salisbury. An MG stopped; the driver said that I was welcome to join him if I didn't mind the labrador on my lap.

I didn't. We sped off. The brass disc on the labrador's collar identified its owner as  Lt. Col. Awdry. We passed the badges on the hillside at Fovant; I'd not seen them before. My host pointed them out.

"Had some of those CND chappies up there the other week," he said, "carving their badge. Took us all weekend to fill it in."

I kept quiet about my allegiances. I was pro-CND, and fairly pro the armed services- it was only a small accident of biology that had stood in the way of my hopes to be a fighter pilot, after all. At a time when the government was contemplating axing conventional forces in favour of more nukes, it didn't feel like a contradictory position.

I got to meet a fair few retired military types in those days of the late 70s and early 80s, when I hitched a lot. Nice chaps, often with harrowing stories of war, quietly told.

One November, I wore a white poppy and a red poppy side by side. The slightly rottweiler-ish landlord of my local in Portsmouth ordered me to take the white one off. "I'm not having that in here," he said. The other regulars rallied round, and he backed down.

(His predecessor at the pub, the 5th Hants Volunteer Arms, was Major Gladys Walker, formerly of the ATS. One day I went in in an army surplus greatcoat, with Major's crowns on the epaulettes. "Take those off!" Gladys barked (she was good at barking). "I had to earn mine." It was a fair point, and I did, gladly.) 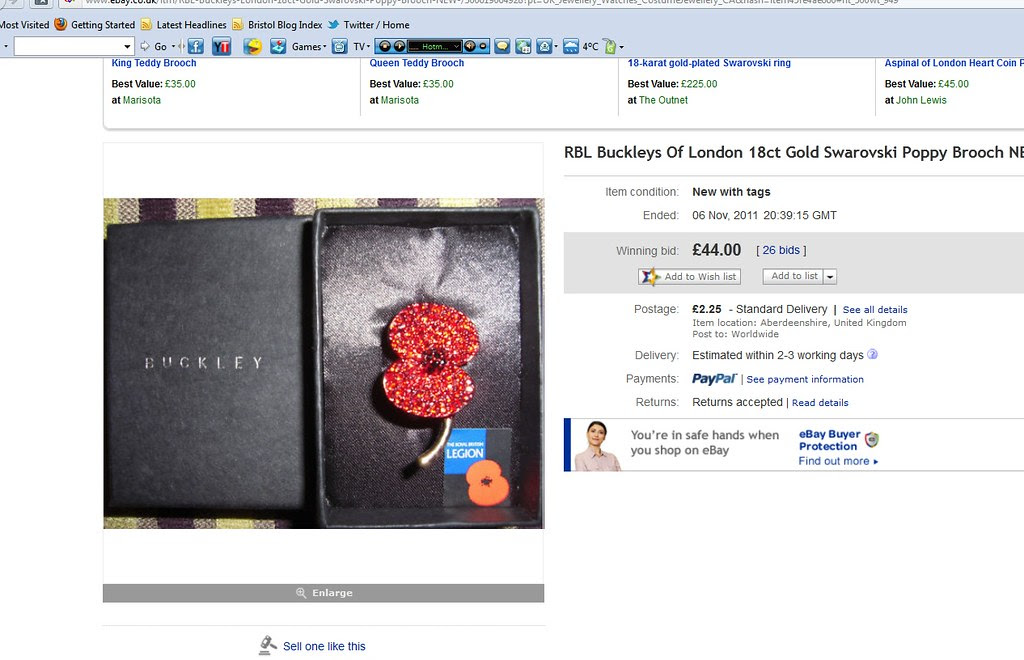 I've seen a couple of examples of ostentatious badges of remembrance recently. This horror, on Ebay. And the biggest poppy you ever did see, on the front of a Land Rover Freelander that was parked (where else?) on double yellow lines....  they make me uneasy, reminding me of Sassoon's 'Blighters' who 'mock the riddled corpses round Bapaume".

....and a few examples of rather militant snark about people not wearing poppies. By people who put poppy twibbons on their Twitter avatar, that sort of thing. Here's a bit from Kipling's Stalky and Co, where a politician comes to the school and lectures on patriotism....

And so he worked towards his peroration—which, by the way, he used later with overwhelming success at a meeting of electors—while they sat, flushed and uneasy, in sour disgust. After many, many words, he reached for the cloth-wrapped stick and thrust one hand in his bosom. This—this was the concrete symbol of their land—worthy of all honor and reverence! Let no boy look on this flag who did not purpose to worthily add to its imperishable lustre. He shook it before them—a large calico Union Jack, staring in all three colors, and waited for the thunder of applause that should crown his effort.
They looked in silence. They had certainly seen the thing before—down at the coastguard station, or through a telescope, half-mast high when a brig went ashore on Braunton Sands; above the roof of the Golf-club, and in Keyte's window, where a certain kind of striped sweetmeat bore it in paper on each box. But the College never displayed it; it was no part of the scheme of their lives; the Head had never alluded to it; their fathers had not declared it unto them. It was a matter shut up, sacred and apart. What, in the name of everything caddish, was he driving at, who waved that horror before their eyes? Happy thought! Perhaps he was drunk.


..and here's my own contribution.

The bigger and redder the poppy
On front of the car or lapel
The more you're allowed to be stroppy
At those who remembrance less well.