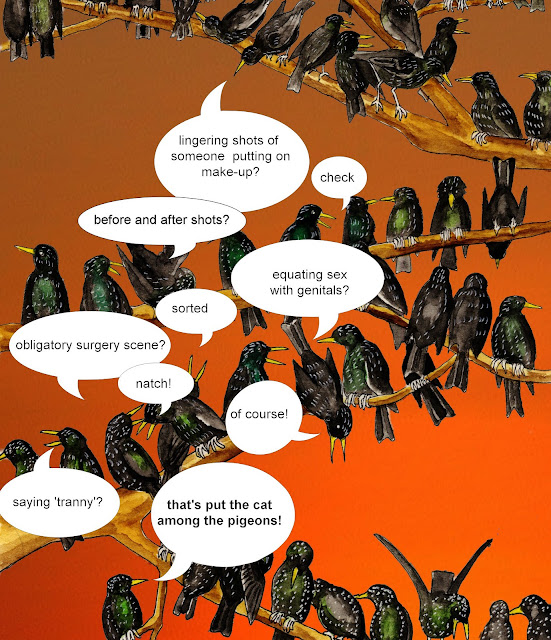 So there's a new reality TV series about Teh Tranz. My Transsexual Summer started last week, and such was the interest aroused in it that I went over and watched it on the Channel 4 website to see what the hoo-ha was all about.

Last time I watched something similar was when Nadia Almada was on Big Brother in 2004; so I tuned in, for the one and only time on that show; she came across rather well, but... "Crikey!" I thought; "Trash TV or what?".

Similar format here with MTS; seven trans people are put together in a big house and get on with it, whatever 'it' is. A process that seems to involve hours of putting make-up on, and screeching at each other over bottles of white wine in the kitchen. Getting past my initial discomfort at watching a group of people whose common denominator is that they want to appear on a reality TV show, though, it (and they) managed to be quite engaging, in a way that the Big Brother people generally failed to achieve, in the one episode I watched.

There had been high hopes for this series, not least because Paris Lees, a bit of a rising star on the trans scene, consulted on the programme, which was made after C4 signed up to the Memorandum Of Understanding with Trans Media Watch, back in March. The idea being that media people should know where to find information about trans stuff, and that trans people should be involved in the process of portraying them, rather than simply being something in the specimen jar.

Were those hopes realised? We did get to tick off a whole bunch of cliches in this episode; plucky Karen goes off for her op; voiceover tells us that it will "give her the vagina she had always wanted." Fox is said to worry about "how far he has to go to become a man." Lewis "is having a wardrobe crisis". Make-up. Make-up. Talking about make-up. Make-up.

The participants' use of the term 'tranny' has caused a bit of a ruckus online; maybe we'll go into that sometime else (I write about my opinion of the word in the  soon-to-be-published META online magazine).

Participants in this sort of programme are always going to be hostages to fortune, in the shape of the programme maker who wields editorial control and the voiceover microphone. Max, who on present showing seems the most thoughtful of the participants, has already expressed his disappointment with the way the show ended up.  On the one hand, we have the standard tranny-on-the-telly tropes, and can perhaps understand why, seeing this programme, Michael Pilgrim (in the Telegraph) should think that "being convincing, of course, is the aim of the transsexual". If, at least, we were being charitable and didn't have much regard for Mr Pilgrim's intelligence in the first place.

And on the other hand, and despite the tinkering, we get to see a diverse bunch of trans-identified people getting on with stuff. And see things from their point of view. And care.