a swim along the Avon 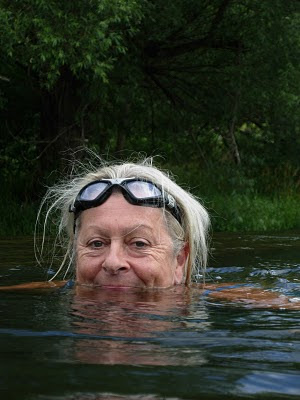 There's a nice little round trip I've done a few times by canoe, from Warleigh Weir at Claverton along the Kennet and Avon Canal as far as the Dundas viaduct, then down the Avon back to Warleigh.

I thought that the downriver bit of the trip would possibly make a good swim. It's a mile and a quarter, but the current helps you along. So I got in touch with Mal, who is a very keen swimmer of uncharted waters. She was extremely keen. So were several other people. So it was time to get planning.

I knew that we'd need to take a boat along in case anything went wrong- the river runs deep and between steep banks, and getting out might be a problem. So I took my big canoe, and Brendagh volunteered to help crew it, as she didn't feel quite up to the swim.

There was a bit of a dropping-off of numbers as the day approached. So at last, it was Mal, Brendagh and me. And the canoe on the roof of the car.

Trundling down to Warleigh, we looked around for Mal's friends who were expected. No sign. So Brendagh and I paddled along the canal while Mal walked. It was a nice Sunday morning; it had been raining right up to the time we arrived, but the sun was beginning to make an entrance, and there was the promise of a good day ahead.

We passed lots of narrowboats, and examined them critically for style. There were the usual 'castles and roses' decorated ones, but several had more individual paint jobs. And there were lots of seriously lived-in boats, shabby and comfortable-looking, with groups of hippyish young people lounging on the canal bank next to them. We exchanged greetings as we passed.

"It's a canal thing," said Mal. "You pass the time of day with everyone. You go so slowly that there's always time for a conversation as you go by."

Mal had been away sailing the canals of Derbyshire, last month, with Adrian and Pig the dog.
"My lodger told me to look out for his parents. He said they were on their way to London, and look out for Roger and Emeline on the Charlie Beere. And I thought, how many thousands of boats are there on the canals? -and then under the bridge came the Charlie Beere! I shouted at them, 'Your son lives with me!' They looked quite alarmed- 'Who is this mad woman?...'"

Mal does have a talent for making friends. In a nice way, she reminds me of Beachcomber's Lady Cabstanleigh- "It's not meeting people that matters, it's making them meet you".

Dundas Wharf, by the aqueduct, was bustling with Sunday trippers, all armed with Tilley hats, showerproof coats and stout boots, and the occasional map case slung around the neck to aid with navigation along the towpath. A notice on a narrowboat invited us to moor alongside for Cornish ice cream. Another boat offered cheese tastings.

Brendagh and I hove to in the basin, as Mal went hunting for a loo. A kind tripper, seeing my camera, offered to take our picture. 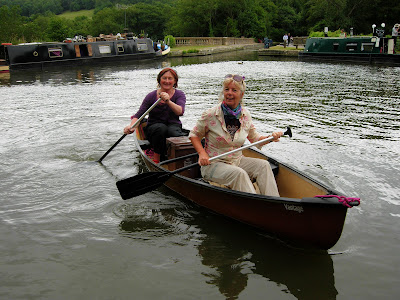 You can see why they come here. The built things on the Kennet and Avon are very good looking. Probably being made of Bath stone helps. But the Dundas aqueduct is very solid and respectably architectural, as opposed to, say, the Pontcysyllte aqueduct that I've walked across, which may be an engineering marvel, but is also utilitarian and even plain scary- the canal there is channeled through iron sections, like an elongated bath tub with a very long drop to the side. 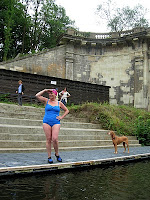 We hauled and pulled and dragged the canoe down the long flight of steps to the river, and Mal got changed as we launched the canoe. And then we were off.

With the aqueduct out of sight behind us, the river became very peaceful. It runs through a steep wooded valley, and although it shares the route with a canal, a road and a railway line that runs along the river bank, there is no sign of their presence, and only a distant murmuring of cars. Sometimes through the woods there came the distant call of a hunting horn. But then it turned out to be an EWS freight locomotive, or the 12:28 from Salisbury to Bath Spa, racketing past.

"It's warmer than Henleaze Lake," Mal pronounced. "If I sound like I'm not mak 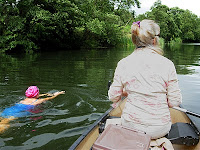 ing sense, ask me lots of questions to see if I've got hypothermia."

The banks were steep and tangled with ivy, brambles, mare's tails, nettles and bindweed, and overhung with alder and willow. Occasionally, there was a cloud of damselflies over the rafts of arrowheads and the yellow- flowered brandy-bottles

"What time is it?" asked Mal after a while.
"About quarter past one," said Brendagh.
"Then I think I must have swum half a mile now."

We passed a rope that hung across the river, with a board proclaiming 500m. Probably something to do with the Monkton Combe School rowing club, from whose steps we had launched. I quietly hoped that we'd gone further than that.

We came to a bank of reeds that ran right across the river. Mal held onto the stern of the canoe, and we swooshed our way through them. 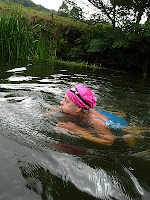 Presently we met two anglers, sitting on the bank with their gear looking grumpy, as anglers do when you meet them on a river. Mal hailed them. They had no defence against the onslaught of her good humour.

"How far is it to Warleigh Weir?"
"Oh, about five or ten minutes walk. That's how long it took us."

And indeed, a few minutes later we heard distant shouts. And round the corner appeared Warleigh Weir, alive and bustling with bathers. 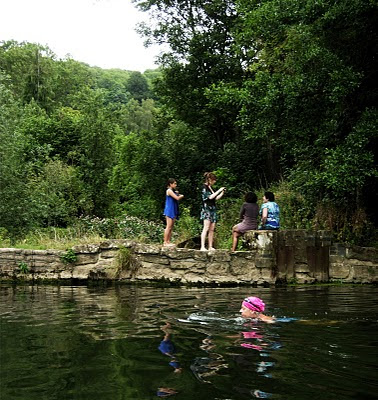 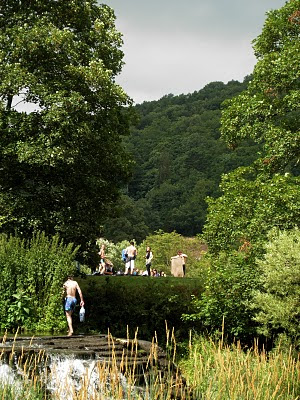 There are some more photos here....