T is for Token

It's LGBT History Month, and here in Bristol, as in other places all over the country, it is marked by events and stuff. As the City Council mission statement says,

For many years the discrimination and hostility towards LGBT people has caused many lives and achievements to pass unrecognised. This has often meant that images of LGBT people and their contribution to society have been distorted and stereotyped. This ignorance has in turn led to prejudice that shows itself in homophobic bullying and negative discrimination. By presenting an honest appraisal of LGBT lives we hope to replace ignorance with knowledge and understanding.

Which is a very good thing, of course. I approve of replacing ignorance with knowledge and understanding. For instance, take Barbara Janke, Leader of Bristol City Council, who said "This month of events offers an opportunity for people, no matter what their own sexuality, to celebrate, discuss and re-examine the contribution made by lesbians, gay men, bisexuals and transgender people." She might learn that transsexuality is an identity thing, not a sexuality thing. Though where would she learn that? In a book? Hang on-

I was at the library the other day and picked up their list of Recommended Reads for LGBT History Month. (click on the images to make them larger) 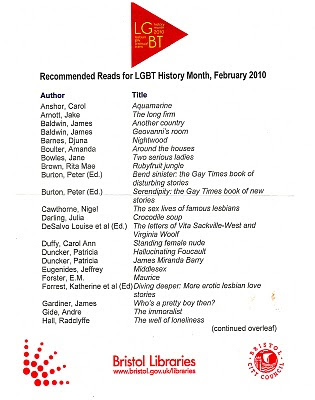 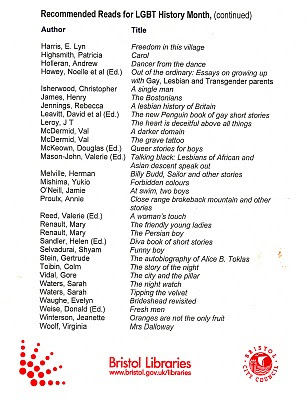 The list might possibly be admired for its steering clear of the obvious... sometimes, anyway. Gertrude Stein's Alice B Toklas is jolly good stuff. Though I tried reading Herman Melville once and found him quite hard going; but no doubt Billy Budd has got something useful to contribute to our knowledge and understanding, as it was written in 1887 and has been suspected to have some homoerotic content, in there somewhere.

Patricia Duncker's historical novel about James Barry, the nineteenth century surgeon who was apparently born female, is presumably the T element of the list. Or can you spot anything else?

Meanwhile, over in Norwich.....