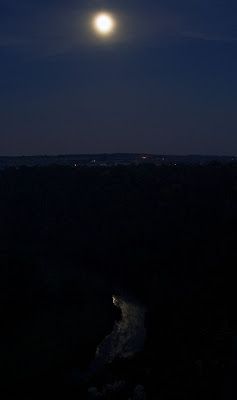 It was a tawny owl calling that woke me up. AWAAKE! AWA-AAKE! I had been wrapped up in that two o'clock in the morning sort of sleep, but I know that owl, it spends a lot of time in the trees outside my window. I know exactly where I am, without having to think about it. I'm in the attic of the big house in South Wales, Ty Celyn, and it's some time in the early 1970s.

AWAKE! Some of the cocooning dissolves, and my senses are starting to tick off the landmarks of my personal geography. I'm in Bristol and it is now. Well, two in the morning, anyway.

I wonder if my earlier self felt my presence and shivered? -I was a bit afraid of things in the dark, back then.

It was funny being back there, and it would have been nice to stay for a bit and catch up with all the lost stuff, but you can't live in the past. As far as I know.