OFCOM - who leads the blind? 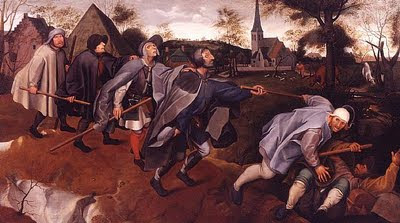 A while back, a TV comedy show called Moving Wallpaper, broadcast in the Friday night 'coming-in-pissed-from-the-pub' slot, had an episode with a transsexual character in it. This was an excuse for lots of Tranny Gags, which is just what people who've come in pissed from the pub like to watch, presumably. It was about as funny and subtle as Bernard Manning on Mogadon, and an uncannily familiar portrayal of workplace bigotry for those who've experienced it. At the time I characterised it as 'dumbfuckery', before reaching for the Basildon Bond and firing off a complaint to OFCOM.

Lots of other people complained too.

OFCOM grunted a bit, woke up briefly from their post-lunch snooze, and said petulantly that they could see nothing wrong with the programme.

Then they went back to sleep in front of the telly.

A few resolute types (thank you, Jo!) appealed against the judgement.

And the review of the judgement, written by Trevor Barnes, Senior Standards Manager at OFCOM, has now come out.

It's nothing much more than a rubber stamp for the previous judgement; there are some amusing bits, though.

I do not agree that the harassment or bullying of transsexual people is regarded by society as acceptable. Of course, parts of society may regrettably still have discriminatory attitudes. And discrimination still undoubtedly exists: one appellant forwarded a research paper detailing transgender and transsexual people's experience of inequality and discrimination between 1998 and 2005. But I note that employment legislation has been tightened in recent years to help protect transsexual and transgender people and now places an obligation on all employers for example to ensure that there is no bullying or harassment of, or discrimination against, employees on the basis of their sexuality or gender. There is no evidence in my view that the bullying or harassment of transgender people is regarded as acceptable.

.... thus speaks white, middle-class, Cambridge-eddicated, cisgendered Trevor Barnes, and let's face it, he should know. Much better, obviously, than the people who've seen discrimination in action, and for whom the Moving Wallpaper episode was little more than a catalogue of all-too-familiar bigotries, masquerading as humour. While he accepts that there has been naughtiness in the past, apparently it's no longer possible because the paperwork has been tightened up. I understand that Mr Barnes is a lawyer, and perhaps a respecter of What Is Written. It is possible that he even believes what he says there, though it is hardly flattering to his intelligence to think that he might. I doubt that he's had much experience of the gulf between what it says on pieces of paper, and how things are between people in the workplace.

Some of the appellants suggested that the programme would have been in breach of the Code if for example the Georgina character had not been a transsexual person but a membere if an ethnic minority or a Muslim, and the offensive remarks had been racist or otherwise discriminatory - and that therefore the programme also contravened the Code in the current case because the offensive language towards and treatment of Georgina was equally unacceptable. Whether a particular programme does or does not comply with the Code would of course depend on all the individual circumstances. But I do not agree that this argument is valid. In the context of a satirical comedy it could theoretically have been possible to have had a different type of character subjected to discriminatory treatment by Jonathan Pope and his colleagues and for this not to have breached the Code. The broadcaster however exercised its editorial freedom by choosing not to do so.

It would indeed be a bold television programme that introduced a Muslim character to be the butt of racist jokes and defended this treatment as satirical. And perhaps Moving Wallpaper are bold folk, ready to satirise bigotry wherever it rears its ugly head, etc etc, but sadly missing the opportunity to show how truly bold they are by exercising their editorial freedom by choosing not to do so.

And then again, maybe they're just tawdry populists out for a cheap laugh. It's much safer to Mock The Tranny, after all.