the year of the sloth

The weather turned wet and windy again and I skulked inside moving things around. I've been given a 12V fridge which has been occupying the forward welldeck for a few weeks now, making getting on and off the boat rather tricky.

Sometimes accepting something daft and easily fixed as normal creeps up on you (me. I mean me) so rapidly that it becomes habitual.

Thus the squeezing past the fridge.

Anyway, I finally cleared enough space along the cabin to move it to its intended new home, under the counter in the galley. And lo, it fit in perfectly as though made for the job.

Next thing will be to wire it up and add a solar panel to keep it in electricity, in the summer months when there is both sunshine and a need for a fridge. You can often tell who doesn't have a fridge, or who at least doesn't run it in winter, by the containers of milk sitting on the gunwales as you pass their boat.

Full of ideas for new pictures. Rather worried when I saw online that someone has painted a picture similar in intent to one I had recently sketched out. If I do paint my pic, hopefully it will be sufficiently my own not to be thought to be trespassing on someone else's territory.

I know some artists and craftspeople whose work has been actively plagiarised, and know how bad that is, and how upsetting and annoying it is when it happens... then there are other ideas that come along and it's good and interesting to see what other people do with them too. I'm pretty sure when I did my Uffington Hare picture, 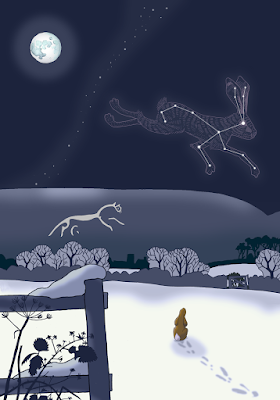 I'd not seen anyone else do anything like it; and it in turn was a development of the idea behind the Questing Vole picture (the idea in question being that if animals look at the stars, they see things differently to us) 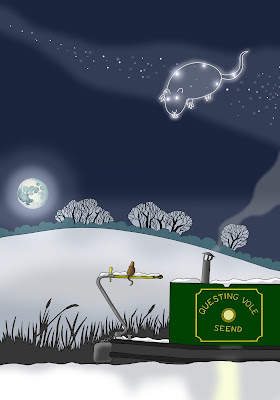 and I used it again in my newest pic... 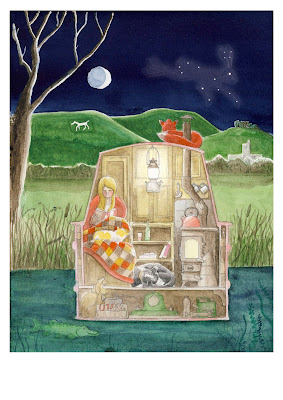 ...Etsy, the online art shop I use, made *helpful marketing suggestions* in a post last week. Apparently sloths are going to be the next big thing. Get drawing then!
Posted by Dru Marland at 07:07