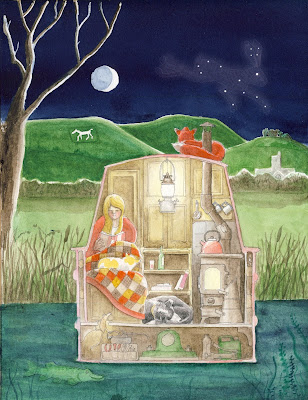 If you're walking along a towpath on a cold, wet night and you see a boat moored up looking all remote and bleak and godforsaken, you may not realise that inside is warm and snug and there's somebody in there enjoying the peace and solitude. Which is what this new picture is about, I suppose. It's set in the Vale of Pewsey; there's the Alton Barnes white horse, and Woodborough Hill, and the church at All Cannings. The interior is not any particular boat, but the dog is Sam's dog Pirate, who's been a guest in Eve in the past, and the cat is Chris and Jinny's Secretary Cat. The fox is the fox's own.

I've been down with the flu, and am finally recovering, though it is remarkably persistent. At least I've got a decent boat. Sherry Jim's big seagoing thing lets the rain in, and he's run out of gas and was cooking something on a fire on the towpath when I passed him yesterday. 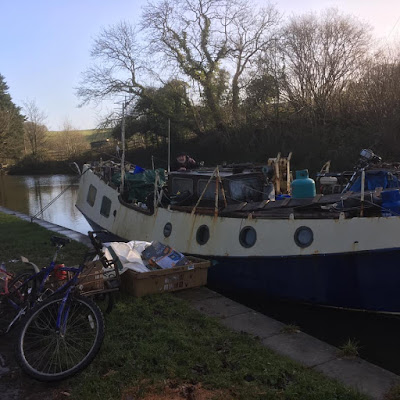 We're all a bit numb from the election results, and the general sentiment that canal people are expressing is that we must all look after each other. Which we already do, but I think that harder times are a-coming. But there we go, no point going on about it. I've already muted a few folk on Facebook who are still posting angry stuff about the injustice of it all, and the phrase 'and so it begins' is getting a bit overused, tbh.

I cleaned my specs the other day, and in the ensuing period of ultra-clarity of vision, was struck by how much a cream cracker looks like the moon looked like when we watched it on telly as the Apollo mission flew over it. Try it yourself; move the cream cracker past your nose while saying 'we come in peace for all mankind' 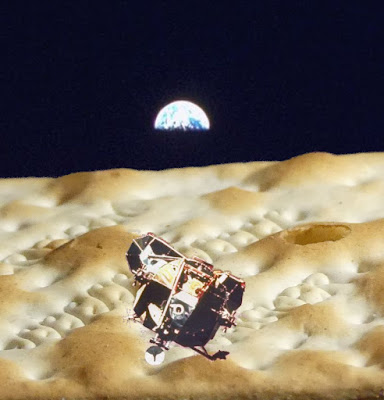