refloating a boat at Avoncliff

Alice and Emily, the Julian House traveller outreach workers, went by on the canal ministry boat Litania, handing out Christmas boxes as they went, and with Fairytale of New York blasting out to announce their passing. Presently the music receded into the distance and they crossed the Avoncliff Aqueduct on their way to Bath.

Then I got a message from Alice; there's a boat that had sunk on Saturday, just beyond Avoncliff, and the owner was back there trying to refloat it. Alice is one of the Floaty Boat group, whose aim is to keep people in their floating homes. There are boaters with experience in salvage work, and there's equipment to use on occasions like this. As I was not far away I cycled down to see if we could help.

Bob, whose boat it is, was there with some friends and a hired pump. They couldn't get the pump started, and had already phoned the hire company, who were sending someone out. With a bit of tweaking, we got the pump got going, but it was really not very effective, as you see in the video; it's a reciprocating diaphragm pump, and may well be good for moving slurry, but doesn't really push through the volume of water you want for a salvage job.

So I cycled up to the Wharf to collect the centrifugal pump and other odds and sods that I thought may be handy, in my bike trailer. It might not seem the fastest way of doing it, but along the canal sometimes can't beat a bike and trailer for speed and efficiency.

Even so, by the time I got back with all the gear, I was pleasantly surprised to see that the boat was thoroughly afloat and buoyant. Bob was pretty buoyant too, even though he was soaked through. The chap from the hire company had brought along a huge petrol driven pump of the correct sort, and that was that.

Bob's still got to replace or hunt down the stuff like solar panels that either fell off or drifted off when the boat sank; and everything is wet through.

But it's a start anyway. 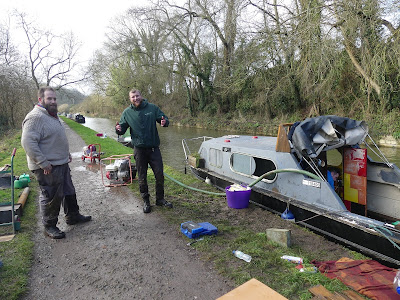