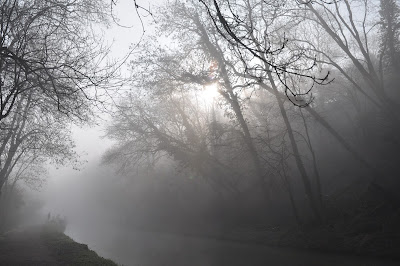 The lights were on at the Fisherman’s Rest
but nobody was at home;
for their halves of mild had added a zest
to the anglers’ habitual moan-

“Oh what shall we do with the otters, me lads?
They’re a-coming on over to here
and swamping our culture. It makes me so mad
that they’re threatening all we hold dear

with their sinister plottings and otter cabals,
and something has got to be done!”
Forthwith these stout fellows marched to the canal
with rat poison, snares and a gun.

They stalked through the reed beds as bold as you wish
intent their foul deeds to perform
and they swore every otter that ever ate fish
would regret it’d ever been born.

then a cloud hid the moon, and from deep in a culvert
a whistling forthwith was heard,
and a patter of paws quite like those of werewolves, that
would make any sane person scared.

’Twas the otter apoc’lypse, aquatic disaster,
an Armageddon of Tarkas;
there was crunching and chewing, and screams, then at last a
great stillness of bones and old parkas.

And everyone swore, as they passed down the pound,
that the place was now cheerful enough
how the miserable sods with their rods weren’t around
-just the wild creatures, doing their stuff.


An otter was killed by rat poison at Marlborough, Wiltshire - I wrote this after the story was posted up on the canal Facebook group and an angler complained that the otters were getting out of hand and needed controlling- we're faced with an 'aquatic disaster', he said. He was given short shrift....  it was an important reminder that you should be careful about mentioning when and where you've seen otters. Because there are some unpleasant folk around.